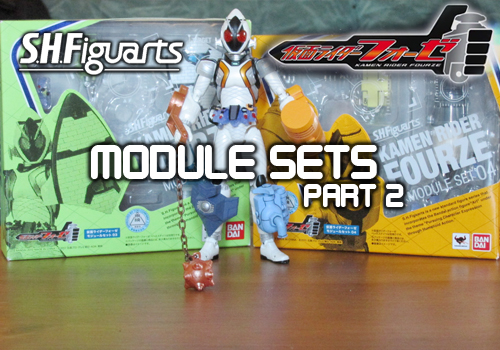 Cometing back to Earth like a Meteor, we analyse the contents of yet another Module payload!
After looking at Kamen Rider Fourze himself and two of his other Module Sets, we’re here to check out Module Set 03 and 04! Module Set 03 is possibly my overall favourite. Not only does it include two of my favourite modules, but the others are pretty awesome too! Let’s take a gander! Chain Array is a right arm mounted spiked flail! It may be old fashioned but it gets the job done! The flail is attached to the arm via chain link and the spiked flail itself  is weighty enough to give the illusion of a 120kg flail. I really like that, despite how high-tech Fourze is, he sometimes just needs to twat someone in the face with a heavy metal object. This set also includes a brand new pair of hands just for this module. Winch speaks for itself, it’s a powered winch that attaches to Fourze’s left arm. There’s no moving parts to this but you can swap out the Boost Hooker (Yeah, I laughed too) for another which has a malleable wire so you can get a great sense of motion with your poses. It’s not too long but being poseable is a big plus!

Module 17 (Flash, aaaaaaah) is included with Fourze’s motorcycle, the Machine Massigler, so we’ll move onto… Shield, which is one of Fourze’s true defensive options. It’s designed after the Lockheed Martin X-33 and, despite it’s small size, is more than capable of fending off the most brutal assaults. In fact, one of the only times I remember it failing was when the Cancer Zodiarts (one of the lieutenants, dubbed Horoscopes) cleaved it in half with his powerful claw. It’s shuttle-like appearance makes this aesthetically perfect for Fourze and I really dig it! Gatling is another in our sub-theme of “Fourze has awesome shit stuck to his legs” and it’s a GATLING GUN! It may be painted in a lovely blue but it’s packed full of DAKKA-DAKKA-DAKKA! Much like other modules, there are no moving parts present and that is a crying shame for this Module. A rotating barrel would have been great. Finally, we come to Stealth! No, not the movie, the module! Based on the Lockheed F-117 Nighthawk, the Stealth module is a useless lump of plastic but is meant to allow Fourze to become invisible for 5 seconds once activated. Might sound very limited but it’s been very useful on a number of occasions. Module Set 04 is the last of the mass release Module Sets, with the Module Set 05 being an online exclusive in Japan and fetching a high price on the secondary market! Set 04 has some of the weirder and more useless modules but let’s see what we got! Water, water, everywhere so let’s drink from my leg! The Water module adds a big tap (faucet to you yanks) to Fourze’s left leg to shoot intense jets of water. It’s silly looking but I actually like this compared to Hammer and it’s not completely static, with a rotating tap head. Medical is just what every Kamen Rider needs, a first aid kit comprised of cosmic energy-infused medicine. No way that stuff could give you cancer or make you trip balls! The kit can be opened, revealing an assortment of medical equipment, with removable syringe, and a medical readout of the lid. It’s nice that they included that detail! The Pen switch is a giant calligraphy brush. For his leg. Yes, that’s a brush leg AND THAT’S NOT CRAZY ENOUGH so the ink produces three-dimensional streaks of pure carbon that can act as improvised shields. It’s so cumbersome and silly in its concept that I can’t help but love it. Wheel is our last module, and despite its misnomer (It has two wheels, not just one) is a Segway-looking travel module that gives Fourze an extra boost of speed without relying on the Machine Massigler. It’s especially useful indoors since it has no trouble riding on walls.

Module Set 04 is definitely the weirdest and weakest of the sets I’ve reviewed thus far but it’s not without it’s charm.

And I fear this is where we leave the manliest of men, Gentaro Kisaragi, as I am out of Kamen Rider Fourze toys to review. If nothing else, this has helped me go pack and watch the show again so I’m thankful for that and if you’re interested in getting in some Space Time yourself, head over to HobbyLink Japan, where you can find all the Modules Sets I’ve reviewed, as well as some other Fourze goodies!