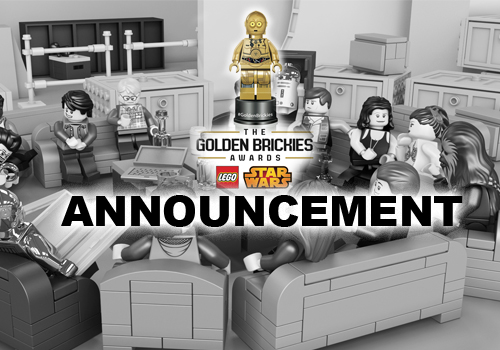 Today, LEGO® Star Wars™ announces its first ever intergalactic national ‘Oscar-style’ awards just for fans! The ‘Golden Brickies’ Awards launch today on the LEGO Facebook page to celebrate the best fan created content for all the creative Jedi builders, budding photographers and film makers out there. In homage to the legendary movie franchise and upcoming Episode VII, LEGO® is inviting families across the UK to take part in this epic event which will culminate in an exclusive red carpet celebration event at LEGOLAND® Windsor Resort Hotel with other amazing prizes up for grabs. Whether you choose the dark or light side, humour is at the very heart of LEGO® Star Wars™, so this is your chance to show us your best photo and filming skills with your vehicles and minifigures. We want to see what you can do!

Once in a lifetime prizes are up for grabs which include:

The #Golden Brickies award categories are:

Entries will be judged by the Golden Brickies expert panel including:

Simply upload your video or picture entry to the Golden Brickies page on the LEGO® Facebook page, Instagram or Twitter, using #GoldenBrickies and that’s it! Submission of entries will be open between 12th September and close at midnight on 26th September 2014. The award ceremony will then take place on Saturday 11th October so make sure you can make it before you enter!