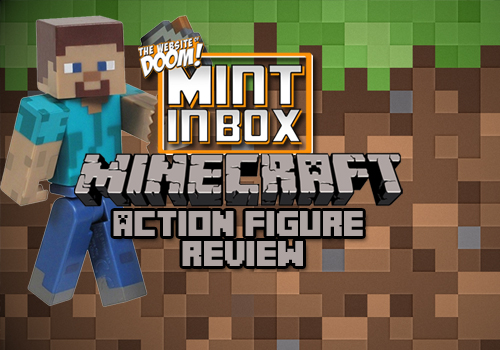 I used my best Minecraft pun in my last review. I’m such a block head. I’m back with more Minecraft 3-Inch Action Figures, one each from Series 1 and 2! Although I’ve covered Steve? in my previous review, I’ve still got some stuff to say about him. Steve? is the main protagonist/default skin for Minecraft so unless you’re venturing into Skin Packs, this will be the face of your character and these figures go to extreme lengths to replicate every last detail of his pixeled proportions. He even comes with a (slightly too large?) gravel block and an iconic iron pick axe! There’s a minor niggle with this particular figure, however, as there was some extreme QC issues with his arms. They were stiff and barely moved so I had to remove his arms and legs off their respective ball-joints to remove moulding flash that was hindering his articulation. Given my previous experience with this figure, I can only assume this is a rare occurrence since the first one was perfect. The Iron Golem is from the second series of figures and, in-game, is a utility mob designed to defend villages from wandering zombie hordes or aggressive players. They are hulking powerhouses and that’s reflected in this figures huge frame. The Iron Golem is articulated in much the same way as Steve? But on a larger scale. His detailing is exquisite, looking exactly how this ancient defender looks in-game, all old, cracked and covered in vines. He comes with an iron block that he can carry and a red poppy, the symbol of friendship with the villagers. As I’ve said previously, the Minecraft 3-Inch Action Figures make for perfect desk toys, especially for Minecraft players and would make for a perfect stuffer this Christmas. Steve? is an iconic video game character and the Iron Golem is a lumbering brute with lots of inherent charm, especially for me. The Minecraft 3-Inch Action Figures retail for around £7.99 and are available at most major retailers.