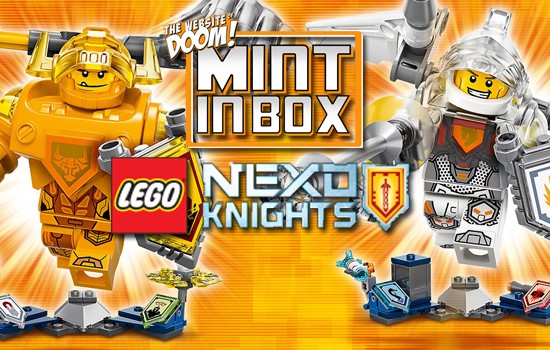 All these primary colours… Quite the little Sentai we’ve got here.

We’re back with the NEXO Knights proper and we’re looking at the tank and the lancer, Axl and Lance, in their Ultimate forms! Again, the packaging is the same as the previous waves and each set retails for £6.99! Lance is your atypical pretty boy narcissist of the team and Clay’s rival. Since he’s the white knight, his translucent parts don’t quite do him justice. His Ultimate set consists of two bags containing 75 pieces and an instruction booklet. Out of all the actual knights I’ve reviewed so far, Lance has got the weakest assortment of weapons, in my humble opinion. First up to bat is Take Off, a NEXO power that appears to give Lance a wing glider on his back and while that’s cool as hell, it’s a little cumbersome — just like his default weapon, a ridiculously big, diamond-tipped lance. Next we have the Water Dragon NEXO power that grants Lance a stud blaster with blue ammunition. Was a trident or translucent ‘water’ sword out of the question, design team? It’s just a bit lame is all I’m saying! Lastly, we have Charging Attack which… adds boosters to the jetpack, I guess? Wooooow… That just sucks. I mean the stud blaster wasn’t original but at least it has an action feature. I can only hope that the powers in-game pack more of a punch than their physical counterparts. Axl is the big guy of the team and comes with two bags of 69 assorted pieces and an instruction booklet. Big McLargehuge is wonderfully goofy in his bulk compared to other minifigures. I’m not really a fan of the Big Figs but this guy has the size but keeps the minifigure aesthetic. That yellow is trouble though; it absolutely loves to mess with the white balance on my camera… The Magnetize NEXO power is delightfully silly, almost on par with the banana power that came with Ultimate Aaron. As you can see, I think Lance and Aaron are surprised by this magnet wand silliness! Finally we have the Stone Stun NEXO power aaaaaaand, for some reason I cannot fathom, it’s weapon representation is a… dreidel? I’ll be honest, I’ve got nothing to say to that, I’ve got no idea what the design team were thinking. Wouldn’t some manner of stone mallet or mace be better for this? Overall, I’m digging the Ultimate Knights over their evil counterparts, mostly because they’re all colour-coded like The Visionaries, which makes me super happy. I still need to hunt down Lance and Macy but I’m sure I can find them soon enough. For now, these Ultimate sets get my stamp of approval!