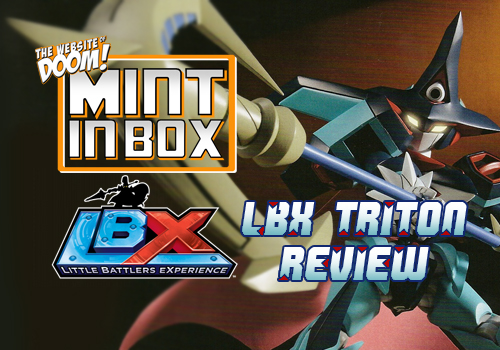 Under the sea! Under the sea! Everything’s better, down where it’s wetter! Welcome back to another LBX review and this time we’ll be looking at the fifth LBX for the Split-Second Emperor, Kaidou Jin! LBX Triton is one of the first LBX model kits I saw and I was instantly invested in it’s cool wizardly design. One thing I neglected to mention last time is the box. Each LBX is packaged in boxes that emulate how they look on the show, even down to Frame-type (Knight) and the fake manufacturer logo in the bottom left, in this case Cyber Lance. Triton starts life on a multi-coloured sprue and it’s brilliant to see multiple colours of plastic on a single sprue, something that very few model kits do! The instruction booklet is full colour, making it very easy to follow despite being in Japanese and even features a quirky little comic strip on the back with modelling ideas. Unlike most spurekits you may have dealt with, these pieces are designed to pop right off the sprue with little-to-no residue (which you can always clean up with a hobby knife). The head (as well as much of the body) is built quite simply by layering plastic parts and adding stickers to the eyes, the underside of the “hat” and the back of the head plate. The body, limbs and the joints that connect them all follow the same process, the joints being the fiddliest pieces to deal with. The inner chest has a little Core Box piece to show the CPU, internal mechanisms and other such tech-gubbins. Triton’s leg assembly, despite being quite bulky, reminds me more of the kinf of feet that Strider frames have (Strider frames tending to be more feminine). Unlike Ikaros Force, Triton comes with a printed cape and you have to actually cut it out of the instruction manual, adding stickers either side to create an attachment point. It’s an ingenious use of the materials at hand. The completed Triton is a fantastic poseable action figure. Equipped with his Seahorse Anchor and his alternate hand, he’s got a great aesthetic to it. The one problem I have with it is that the plastic (and some of the stickers) for the blue and red are a couple shades darker than they ought to be, coming off as more of a navy and crimson, respectively. Now that I have two model kits, I can now show off the customisation options for this line, thanks to a series of universal joints and connection points. You can mix and match body parts and even weapons! Triton is one of my favourite LBX and I’m happy to finally have him in physical form. Barring some colour issues, this is a fantastic release and I highly recommend him for the model-maker both young and old!