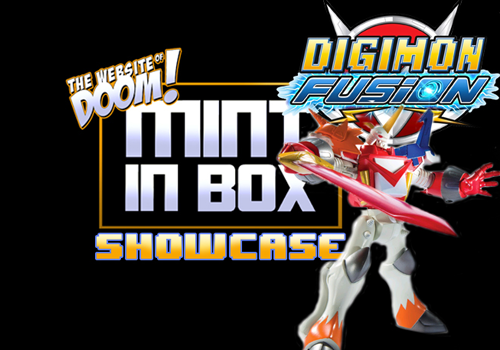 The Digivolution starts today! Digi-See? Digi-Hear? Digi-Know what’s coming?
We’re proud to present a special showcase of figures from the brand new Digimon Fusion line. We’ve got a nice selection of role-play toys to look at but why not check out some details on the show! Get ready for the launch of Digimon Fusion, a brand new fun and interactive toy range from Bandai, coinciding with the new CiTV series which airs weekdays at 07:15 from 24th February. Kids can ‘fuse’ Digimon figures together, collect their favorite characters or create fusions with the Fusion Loader, just like in the TV show. Perfect for boys aged four to seven, this range is sure to be a hit with fans. First, here’s a video review for the Digi-Fusion Loader, the Digivice for this particular season. While it’s got a multitude of play features and cross-play with the figures, the touch screen interface can be a little sensitive but apart from that, it’s a very robust release, check out the full review below!

Next up is one of the Digimon Battle Pack figures and it’s none other than First Gen ‘Mon, Greymon! His colour scheme is a little different from what I remember but that monstourous dinosaur defender of children is extremely recognisable to me. This “chibi” style figure features 5 points of articulation and comes with a card to be used with the Digi-Fusion Loader. He’s a fun little guy and his articulation helps make him expressive. This particular figure has an RRP of £4.99 but they also come in two-packs for an RRP of £8.99.

And finally we get to my favourite figure out of this selection, the Deluxe Digi-Action Shoutmon X4! This guy looks great, the combined form of Shoutmon, Ballistamon, Dorulumon and a bunch of Starmon to form the sword. He’s ver clearly emulating the first fusion Digimon, Omnimon. Each of the Digi-Action figures has a unique action feature and Shoutmon x4’s is his swinging light up blade! There’s a little poseability in his left arm but the right is dedicated the swinging mechanism and the red LED, which, when the arm is fully extended, looks great in low-light situations. This figure has a great silhouette and a very heroic look about him. Also available is Metalgreymon and both retail for £14.99

It’s great to see Digimon return in a massive way. I grow up with both Digimon and Pokemon and while Pokemon has steadily endured, I’m sure that this fresh new take on Digimon will garner it a huge fanbase and Bandai UK has plenty of great toys to satiate those young viewers.