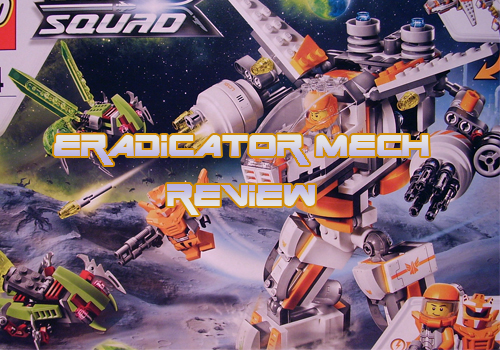 *sings* Set controls to outer space now! Flying higher than ever before! Ever since I was a little kid, my favourite LEGO themes were either Space and Aquazone. I loved the likes of Ice Planet 2002, Exploriens and the Insectoids. I’ve always been into Sci-Fi and LEGO had plenty on offer for me. Coming back to LEGO in a big way for reviews and I’m happy to see nothing has changed. Galaxy Squad is latest in this intergalactic lineage and, after it’s release in January 2013, garnered a fair amount of praise from LEGO fans and kids alike. The Galaxy Squad are 4 colour-coded teams featuring humans and robotic partners, fighting against insectoid invaders. The set I’m looking at today is the 70707 CLS-89 Eradicator Mech, part of the Orange Team. It has a piece count of 440 and retails for around £34.99. This is by far the biggest set I’ve reviewed so far (that may change in a week or two) and it shows as you open up the box to find 3 big bags (with tiny part bags inside) and two instruction booklets. I went through two episodes of Mystery Science Theatre 3000 while building this thing, that should give you an indication to the build time of this behemoth.

The first instruction booklet and the first couple of bags are to build the Alien Abductoids and the Jet/Mech torso. But first, lets look at the minifigs first! Jack Fireblade and his nameless Robotic Partner are a fun little double act. Their matching colour scheme is a great shade of orange and come with weapons specifically for them. I have to pick fault with Jack’s helmet piece though. It’s been around for a number of years and every time I see it, it’s covering a minifigs mouth and that bothers me. It seems like a design flaw but its a cool design so I guess its here to stay. The Robot Partner has a great new head piece and comes with wings for the torso piece (first seen in the Minifigures line). Interestingly, this is the only set in the theme that doesn’t include an alien insect minifigure. The first two builds are the Abductoids and while they share much of the same pieces and a similar build process, I’m glad they made them distinct, with one adding wings and a stinger to its cocoon. The cocoons split in half and minifigs can be stored inside (like poor old Santa). The bulk of this set is the Eradicator Mech, starting with the jet for pilot Jack Fireblade. There’s not as many tiny finicky pieces like the Mandolorian Speeder I reviewed, this is more layers upon layers of plates and bricks to form a solid cockpit/jet. The second half of the instructions are for the mech torso and this is where they start throwing ball-joint sockets and hinges at you. This will be the solid core of the finished mech. The second instruction booklet details the mech’s leg assembly and weapon arms. The legs were way more fun to build than they ought to have been. It was interesting to see how the designers built up the leg to maximise their integrity and still allow for movement like an action figure. The hip segment contains ratchet joints on either side to maintain stability when the weight of the torso is added. These LEGO balljoints don’t maintain their grip for too long though and I recall that being a problem with the Bionicle figures of old (the last LEGO sets I bought as a kid) The weapon arms are simple enough, with a rotating gatling gun gimmick in one and flick missiles in the other. I think I’ll take this time to point out the stickers. They’re mostly transparent and are apply easily. If you mess up though, you can carefully peel them off and reapply though I doubt you could do it too many times. When you bring all the elements together, you end up with a walking artillery mech and a jet but the main show is the combination of both into the Eradicator Mech proper. The finished product is a terrific titan, with every thought put into it’s balance and articulation. The legs are solid and allow for lots of movement thanks to the ball-joints and hip ratchets. The arms are equally as articulated and the hip allows for the torso to swivel as well. The Eradicator Mech is a worthwhile purchase in my mind, with lots of action features, a really fun build and a gorgeous colour scheme. I highly recommend picking it up and any of the other Galaxy Squad sets if this is anything to go by.