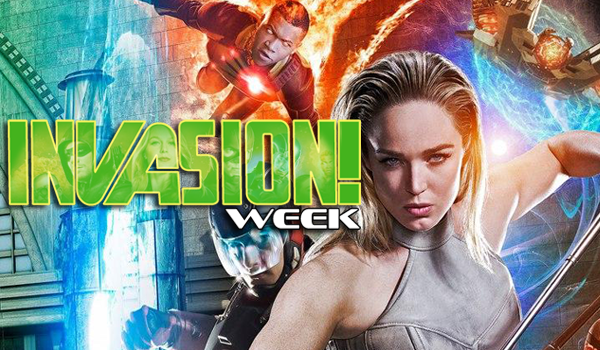 But I kinda got what I should have. The ongoing problem, as I’ve stated before, with these crossovers is that they are always severely limited by a TV budget and that sadly rears its ugly head in the final part of what has been an otherwise stellar crossover event.

Hell, the fact that four shows can interweave a narrative on consecutive nights in the week is accomplishment enough but when it came to the big punch up at the end, it kind of fizzles out.

Logically, I knew it would but in my heart I secretly wanted this to turn into an Avengers moment. Which leads me to wonder how the CW expects to get away with letting Kara can call them ‘Earth’s Mightiest Heroes’. Kiiiiiinda Marvel’s schtick, DC. Stay in your lane.

But for what it was, it was awe-inspiring to see the S-shield, lightning bolt, green quiver and assorted other gimmicks, weapons and powers stand shoulder to shoulder. It’s the kind of thing I watch Super Sentai and Kamen Rider for, the big-ass group shot and, oddly, that’s what this fight reminds me of. Just a mindless brawl with the assembled heroes to satisfy those who care about that sort of thing.

What these shows really excel at during crossovers are character moments and humour and this certainly delivers in spades. The ensemble cats of Legends had been relatively quiet in the preceding episodes but here they get the spotlight for some genuinely funny bits.

Like Steel debuting his goofy costume that makes no sense in terms of his power set and is just there to reference the comics!

Or that sly Superman Returns nod we all hoped would be in there!

If there’s one genuine misstep for me, it’s the resolution for Diggle and Cisco in terms of the Flashpoint Fuckery. I don’t feel it’s really earned. Cisco’s especially because he’s with the Legends when he fucks with time and we all know that the Legends get a mulligan on any time shenanigans. But like the shows said: it’s illegal to hate Barry Allen.

But when’s all said and done, we got a Justice League on TV that doesn’t look terrible and with a diverse and dynamic roster who are all genuinely likeable so I can only clap my hands at this momentous miniseries for bringing us something that is very much in the spirit of DC Comics.

We get the promise that this certainly won’t be the last time these characters interacts and that’s a great thing because the more this group of shows manage to one-up the movies, the more money will be thrown at them and that can only be a good thing.