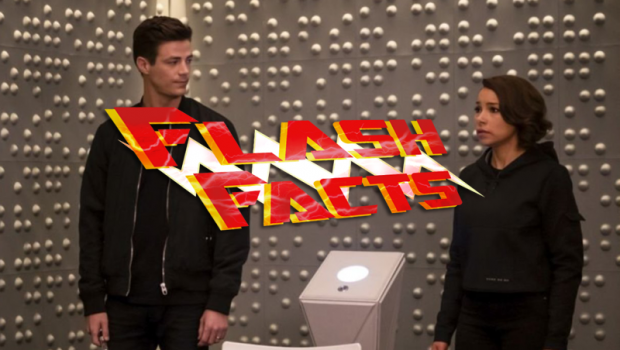 Flash Facts – “What’s Past is Prologue”

So take me awaaaaay! I don’t miiiind! But you better promise me I’ll be BACK IN TIIIIIIME!

The inclusion of ‘Back in Time’, not once but twice, is one of the greatest moments this show has ever had and I will gladly fight anyone who disagrees. It’s perfect for the situation, perfect that Ralph would choose it, a 100% belter of a song. Fight me.

The concept of Barry and Nora travelling back through time to collect all the pieces needed to build a power dampener for Cicada’s dagger is really cool and offers a whole host of interesting scenarios and afford some cameos by previous villains which is pretty dope.

Granted, Tom Cavanaugh is not only still on the cast but is directing the episode so it wasn’t hard to get him but Teddy Sears and Tony Todd returning as Zoom and Zoom’s voice was a nice little surprise!

But yes, Tom Cavanagh returns to reprise his role as Eobard Thawne/Wells and Tom knows what to do with his best role and it shows. Between a fantastically sadistic Thawne, to enraged…

To this delightful little wink to the audience (fuck you very much, Tom)… Tom does a fantastic job and I can’t wait to see what his future role means for The Flash, long-term.

I’ve had a sneaking suspicion that Nora had some involvement with Thawne for a while, since she seems to showcase an ability similar to his; slowing down time around her rather than accelerating to super speed like Barry. I’m sure someone has already suggested that she’s really Thawne’s daughter but I think that’d be a bit too simple for this show. Stupid enough for someone to have suggested at one stage though.

And Nora’s presence throughout the episode is pretty damn good, seeing first hand that her dad got his shit rocked on multiple occasions by guys smarter, faster, and deadlier but still come out the other side. It still shakes her but hopefully this means she’ll be less of a nark about Barry being a hero.

Naturally, the plan goes to shit when Cisco breaches Cicada’s empowered dagger into orbit rather than another dimension but hey, it’s the middle of the season, we can’t get rid of the big bad this early so we’ll make Cisco utterly stupid, instead. Thankfully, Frost reemerges (despite appearing last week) and puts the snow boots to Cicada, her powers unaffected by Cicada’s dagger.

It’s cool that Frost will probably be the lynchpin in the plan that will take out Cicada but we’re gonna have to wait a while. Cicada scampered, probably sensing the upcoming crossover (which I will be covering, don’t worry).

Speaking of, a post-credits scene has popped up throughout this week after Supergirl and Arrow and now The Flash, showcasing the aftermath of a huge battle featuring a lot of familiar heroes with one left alive…

Oh my god, it’s finally happening! That’s John Wesley Shipp, in the original costume from the 90’s incarnation of The Flash! I marked out super hard for this because A) he looks great and 2) we’ll get at least one good Flash suit in the crossover!

So yeah, Earth-90 (Heh.) is royally boned thanks to the appearance of Mar Novu, the Monitor. The Monitor is a guardian of the multiverse and comes from a race similar to the Watchers in Marvel’s cosmos, though the Monitors can be a little more hands on, as this one appears to be. Along with another party, he appears to be the main antagonist for the three-part Elseworlds crossover next week. I’m really looking forward to it!

So be sure to come back on Monday for the first of my Elseworlds reviews where we’ll be seeing a Freaky Friday situation between Barry and Ollie and the long-awaited arrival of The Bat.