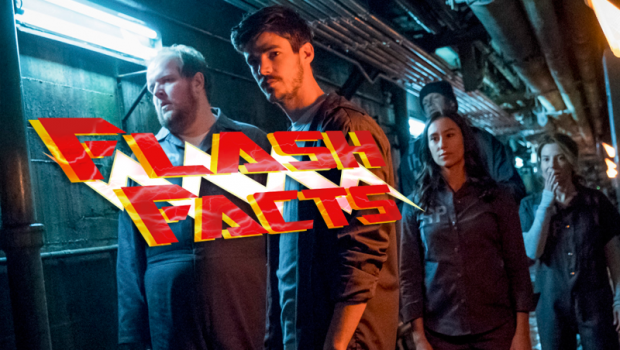 Something, something, Cyndi Lauper reference.

True Colors (god, I can already see myself mispelling the article title because the Americans misspell everything with a ‘U’ in it) is actually a pretty good episode, which I wasn’t expecting. I’ve kinda fallen out of love with the CW recently (except for Black Lightning) because I’m starting to see repeating trends and boring, plodding, plots in all of them.

But despite knowing the broad strokes of this episode, I still kind of enjoyed it. Barry and the Bus Metas (which is a great name for a band) have a pretty good dynamic which I wish we could have focused more on and given all these one-note characters a little more depth. They’re all pretty much the same people as they were pre-capture. Not saying they can’t be assholes through-and-through but if that’s all they are, why should I care?

I think the only one who gets any real development was Becky Sharpe, aka Hazard, who seems to have learned her lesson while imprisoned and was genuinely on the path to going straight. AND THEN DEVOE TURNED UP and fucked everything up for everyone because that’s his raison d’etre.

He seemingly transfers his conciousness to the other Bus Metas but they all collapse/die until on Becky remains standing, with DeVoe in control of her. It’s heartbreaking to see another good person become a meat sleeve for DeVoe’s brainwaves and it seems Marlize DeVoe doesn’t seem too fond of her husband’s new lack of boundaries and love of wearing other people’s skin. I smell an 11th Hour face-turn!

Speaking of face turns, we find out about Ralphie’s secret ability, namely shape-shifting. While it’s mostly used for hi-jinks for funny CGI bits and trying to break up a Bus Meta Sale with Amunet Black as Warden Wolfe, it does come in handy when, during Barry’s appeal, Clifford DeVoe comes rolling in, completely unmurdered! Ralph, as DeVoe, spins a tale of vague recollections and waking up in his house while Marlize can’t say shit because everyone apart from the judge and the crowd know that isn’t DeVoe and it’s a great scene.

Another good scene is Caitlin trying to break Ralph out of his funk and after making no progress, breaks out Frost to take him to task. The continuing fusion of personalities would be interesting to watch but eventually, I hope we have Caitlin with ice powers and not this constant back and forth.

Overall, just a standard but fun episode to watch. With DeVoe seemingly after the Bus Metas now for his insidious plan, Ralph and the remaining unknown metas are in the crosshairs so we’ll just have to wait until next week to find out who Subject 9 actually is.