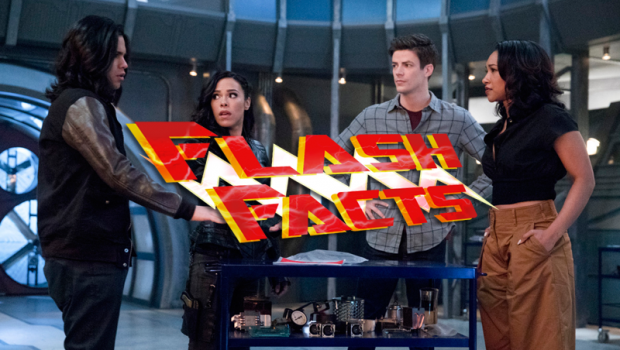 Flash Facts – “Therefore She Is”

For a show about the fastest man alive, this season has cemented that Team Flash loves to fuck about. There’s only a couple things I want to talk about so this is going to be a real short one.

Cisco and Gypsy broke up! That blows but despite it adding to the final arc’s slowdown, it’s very well executed and isn’t some BS reason like “I can’t be with you because I love you too much”, it’s just a very human response to a conflict of interest. I think it’s fair to assume that, at some point, we’ve all been in a relationship where you’ve had different priorities to your partner. You can make that work but if it’s a conflict of where you want to be in the relationship, that can spell disaster and I like that both characters took the emotionally mature step of ending it, despite neither being happy about it. Very good sub-plot overall.

On the other end, we have Marlize and DeVoe, skulking about gathering materials for five satellites to enact DeVoe’s master plan. We finally reach breaking point for Marlize as her husband or, at least, The Thinker begins killing indiscriminately. Hell, he seems to take satisfaction from it and she realises that the man she fell in love with is truly gone. After a hectic battle with Team Flash that leaves her injured, Marlize reveals her intention to leave DeVoe while sitting in the Thinker’s chair. With all of it’s technological advantages, DeVoe can do nothing as she delivers a witty call-back and teleports away. It’s great to see her escape this abusive relationship but only time will tell if she is friend or foe.

In short, Caitlin’s practically going full Suicide Squad in her quest to draw out Killer Frost and while Harry is still losing his mind, he finds help in the form of Cecile’s telepathy. I like Harry and Cecile, they’ve got way more of a fun dynamic than Cecile and Joe have.

Finally, we come to the special delivery at the end of the episode. Mystery Girl shows up with a gift for Cecile’s baby shower but when Iris approaches the door, she disappears. I don’t think MG and Iris have interacted thus far, it’s pretty much been everyone else and I can assume why. We see her hiding down the hall from Iris before bolting off in a mix of yellow and purple lightning. With this, we can definitively tie her to Barry and Iris after Run, Iris, Run. This is their daughter and she really doesn’t want to see her mum… Ze plot thickens!

Next week will see the return of Amunet Black and a whole bunch of Harrys in Harry and the Harrisons.

Tags: Flash Facts, review, television, the flash, therefore she is