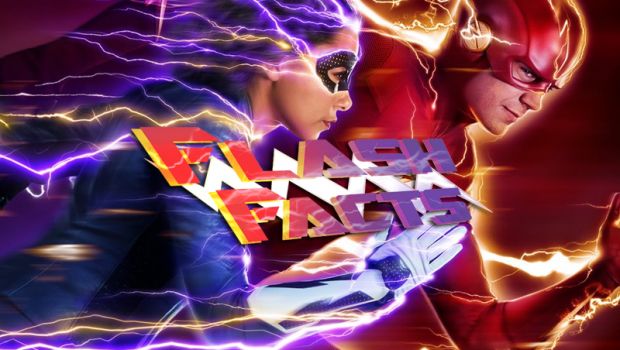 Hi, guys, and welcome to Season 5 of everybody’s favourite cynical look at everyone’s favourite scarlet speedster! Season 5 hits the ground running, picking up exactly where Season 4 left off, with the arrival of Nora West-Allen, Barry and Iris’ daughter from the future!

Oh, you sweet, sweet child. Thank you for gracing us with your presence. It’s been too long since someone had some bloody enthusiasm and wonder in this show and I’m so glad that Jessice Parker Kennedy is giving Nora a tangible sense of hype just to be near Barry. She’s certainly her father’s daughter too, inheriting a selfish irresponsibility that is uniquely Barry Allen.

I do like that they retread the cryptic newspaper headline and show it’s follow-up to justify Nora’s desire to risk breaking time just to spend time with her dad. It’s very humanising and while I’m clearly biased in letting her away with it, Nora hasn’t erased children from existence with her actions. Yet. If she does, THEN I’ll lay into her just like I do with Barry.

Flash Fact: Nora’s future knowledge reveals a ton of neat easter eggs but, personally, my favourites are her future vocabulary. ‘Schway’, said during a rather awkward coffee break with Iris, is the new ‘cool’ and is actually a slang term from the Batman Beyond animated show. ‘Grife’ is from even further in the future, originating in the year 3000 and being a term associated with the Legion of Super Heroes. One of it’s members, Lightning Lad, is mention in the aforementioned coffee break and the Legion has even appeared in last season’s Supergirl!

I’m glad that Hartley Sawyer is joining the cast full-time and his numerous epiphanies throughout the episode are both hilarious and nice little fourth wall breaks like mentioning he could have died in another timeline, which he actually did, pre-Flashpoint.

I’m also digging that it seems Ralph is going to be helping Caitlin dig deeper into the disappearance of Killer Frost, even managing to show that her father’s death certificate is faked. Looking forward to seeing how this plot line develops further.

Flash Fact: The non-existent coroner, Cameron Mahkent, is the identity of Golden Age Flash villain, Icicle. A very nICE nod to Caitlin’s powers, if I do say so.

And the last thing I want to mention is the new suit, designed by my favourite Atom; Ryan Choi! I don’t like the new suit. It makes Grant Gustin look like a right lanky streak of piss and it’s so plain! Yeah, the other suits weren’t bang-on for the comic version but they looked pretty damn good! We even get to see two back-ups in this episode and they look way better than this version but I suppose it’ll grow on me throughout the season. It’s great that Barry finally has the iconic ring, though!

Overall, Nora is a brilliantly fun way to kick off the new season and I hope that the new villain, briefly seen towards the end of the episode, will be just as complex and menacing as The Thinker. Come back next time and see if the show continues to be good or if it’s going to get Blocked.