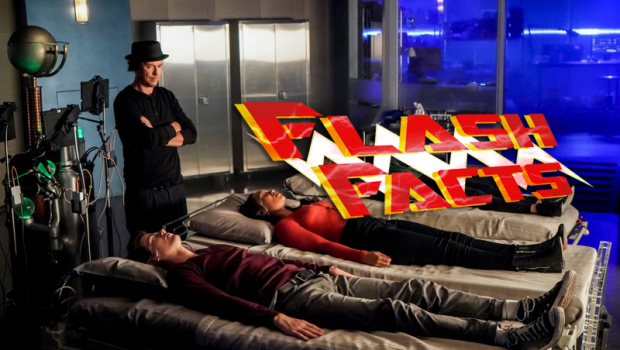 I spent a lot of this episode figuring out where the toys in the Flash Museum came from!

This is a real interesting idea for an episode that sadly has to share time with uninteresting elements. Like, who cares about Ralph trying to get hook up with some random at a bar? There’s more interesting stuff to focus on!

The A-Plot is a plan to wake up Cicada’s niece by going into her mind using tech acquired from an alternate Earth version of Jervis Tetch aka Mad Hatter, which is a neat detail. Kinda like Caitlin’s skating outfit being a one-to-one recreation of a DC Bombshells Killer Frost statue.

Anyway; Nora, shit-scared that she’s about to be discovered, rushes into using the machine before anyone finds out her connection to Thawne, something Sherloque figured she would do.

It’s an interesting trip through both the kid’s and Nora’s psyches, and the little touches they do to mirror them, though the obvious colour saturation kinda gives away the initial confusion Barry and Iris have.

So while Nora is trying to guide Grace to the nearest exit with the blandest platitudes, Barry and Iris go for a trip round the Flash Museum and watch their daughter’s perception of the past. Lots of cool little details dotted around including mention of Red Death and original Flash comics.

I think my favourite part is that Nora’s memory guardian is an empty Reverse Flash suit and I just love the effect used for it. Plus, when Sherloque is informed of it, adds another piece to the puzzle.

Meanwhile, Grace goes ape-shit when she figures out (somehow) that Nora is the Flash’s daughter and starts controlling her memory guardian, Cicada, directly. And then the person behind the mask changes to what appears to be an older version of Grace.

This seems to indicate that not only is Grace sort of controlling her uncle’s actions; perhaps the dagger and the shard in her head are shared and her protectiveness and anger is feeding into Cicada’s. Regardless, they should have tossed her tiny arse through the portal, it couldn’t have done any more harm.

But the idea that Grace becomes Cicada might link into the future plot even more so. I mean, Cicada killed, and still is killing, more people than Zoom and Red Death so what if there’s two? Or, once Orlin dies, she takes the mantle with an even more demented zeal. Food for thought.

There’s also a small subplot about Iris starting up her own newspaper and her doing that inadvertently brings the Crisis where Barry disappears forward two years, ala the newspaper we’ve been seeing for the past 5 years.

Overall, a fairly solid episode that pushes the Nora’s Lying Arc and sets up a potential love interest for Cisco so we’ll see how that pans out but come back next week when we’ll be getting Goldfaced!