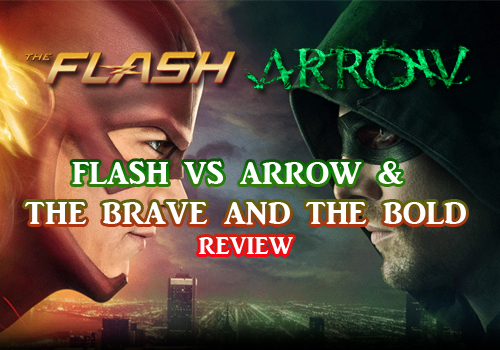 Flash Facts: “Flash vs Arrow” & “The Brave and The Bold”

Red vs. Green. Light vs. Dark. Adorkable vs. Handsome. Who will win?
The CW’s DC superhero line-up is fantastic, not just The Flash (which you’ve been following here) but Arrow, which is on it’s third season. Arrow has been building the televisual DC universe for some time and now with The Flash running with it, it’s only built up speed so it’s only natural that we’d get an epic team-up between the two! Running on consecutive nights and linked loosely by a common thread, both episodes of Flarrow have been FANTASTIC to watch. More entertaining than Agents of S.H.I.E.L.D. has been, I dare say.

Now, I can’t really do a blow-by-blow of 90 minutes of superhero action in one simple review so I’ll be covering both Flash vs. Arrow and The Brave and The Bold together but focus on specific parts for ease.

For Flash vs. Arrow, Team Flash is investigating the metahuman, Roy Bivolo aka Prism (aka Rainbow Raider), a meta with the power to manipulate emotions. I can understand the nickname change but I love that Caitlin offers ‘Rainbow Raider’ and is immediately sandbagged by Cisco. I’m also a big fan of the several hints to the Green Lantern mythos they made in relation to the emotional/colour spectrum. Prism jobs out off-screen and is thrown into the pipeline. The big draw is obviously Captain Boomerang, who was hinted at in Flash vs. Arrow but appears in full force in The Brave and The Bold. Rogue (I see what they did there) Australian Secret Intelligence Service agent and former member of the Suicide Squad, Digger Harkness (played by Nick Tarabay) has an axe to grind with Diggle’s ex-wife and thus garners the attention of Team Arrow. While Tarabay doesn’t play up a stereotypical Australian accent, I’m still impressed with the character’s portrayal as a tactical badass who is easily on par with Arrow (and his sidekick, Arsenal). They lock him up in the Argus prison on Lian Yu so one can only assume that when Slade Wilson makes his escape, so shall Captain Boomerang and I can’t wait to see both.

Team Arrow and Team Flash, as well as their respective shows, are VERY different and that’s reflective in each episode. Flash vs. Arrow is true to the series so far with Team Flash taking the job seriously but still goofing off to a certain extent (mostly Cisco) but even Team Arrow isn’t immune as Diggle’s introduction to Barry is one of the funniest scenes in either series as the usually stoic Diggle is reduced to a slack-jawed oaf in the face of actual super-powers. This is flipped on it’s head when Team Flash heads to Starling City and Barry soon learns that Oliver has a harder edge to him. As Oliver explains, Central City is always sunny and the villains get cute nicknames while Starling is full of murder and is being blown up every other week (they even had an earthquake machine go off once) and it really plays up the contrast between the shows. Light and dark, jokes and drama, but throughout all of it, the two teams get along very well and even exchange gifts at the end of The Brave and The Bold. The two-parter balances light and dark as well as the respective heroes can.

Given this is a team-up between the hooded street vigilante and the scarlet speedster, they balance out the action quite well between CGI effects and live action sequences. Flash has his typical ropey CGI in places but the above moment is hype as fuck! The real fun, however, is in the Arrow half, with an awesome 2-on-1 fight with Arrow, Arsenal and Boomerang. The martial arts and fighting sequences in Arrow have always been a hoot to watch but this was highly entertaining.

The Brave & The Bold:

Both Grant Gustin and Stephen Amell are on fantastic form, especially since they have a history acting alongside each other in the Arrow episodes The Scientist and Three Ghosts, which were the first appearance of Barry Allen in this shared universe. Grant plays Barry as the slightly naïve, over-excitable younger brother to Stephen’s seasoned, veteran hero. While they banter like friends and do look like the actors enjoyed every second playing off each other, there are some harsher moments between the two. The scene where Ollie tells Barry that Starling City is meaner than Central and that he doesn’t have the luxury of being light-hearted springs to mind while Barry calling him out on his dark brooding crap and saying that he can be an inspiration shows that there is a genuine bond between the two.
Flash vs. Arrow gives us the old comic book cliché of the heroes meet and then fight and The Brave and The Bold has the resolution with them teaming up to fight a tough bad guy and I’m a sucker for tradition.

While The Brave and The Bold doesn’t have a stinger, Flash vs. Arrow shows us the return of Ronnie Raymond aka FIRESTORM. I know Robbie Amell would be returning but I still marked out for this moment! Flarrow, as the fans have dubbed the two-parter, was fantastic. That’s it. Start-to-finish, this crossover was an immensely fun tour de force and an absolute joy to watch. Easily my favourite television moment this year and I urge you all to watch it if you haven’t (and shame on you if you haven’t). Next week is the mid-season finale so be sure to come back as we come face-to-face with The Man in the Yellow Suit.