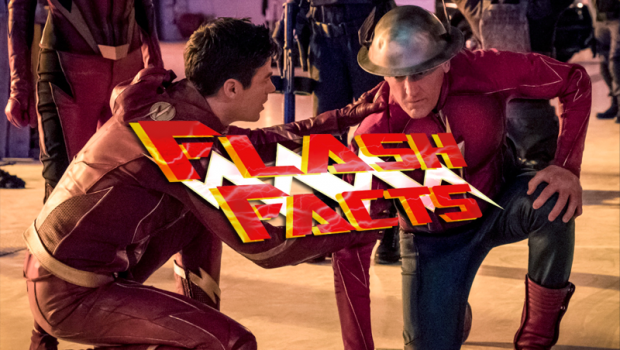 Enter Flashtime is probably the best episode this show is had in a while because it’s a classic The Flash plot straight out of the comics. A nuclear bomb detonates and Flash spends the entire episode figuring out how to stop it while the seconds slowly tick by.

The villain du jour is Veronica Dale, leader of eco-terrorist group, Eden Core. She gets next to nothing in terms of motivation or speaking lines in the show while her comic counterpart left more of an impact by killing Oliver Queen!

Assisting Barry is the returning Jesse Quick and Jay Garrick. I did love Barry’s little quip about Wally, since he’s now running around with the Legends (something I hope continues and he gets more to do in that show than he did here)

Jesse’s main reason for returning to Earth-1 is to get her dad to open up about her mother, the one we have yet to be introduced to though we do hear echoes of her voice via telepathy in a rather touching scene that demonstrates just how hard it is for Harry to talk about her death.

Flash Fact: The equation featured predominantly on the Speed Lab’s writing board, 3×2(9yz)4A, is an equation/mantra that Jesse’s comic counterpart inherited from her father, Johnny Quick, and allowed them both to access the Speed Force.

Jay’s presence is as an additional advisor and to cut Barry’s dumb ideas down, especially when they involve the destruction of the Speed Force. I don’t care how much you hate Thawne, Barry, Jay is not letting you take his speed, you little shit.

Using the technique he used in the courtroom a few episodes ago, Barry is able to communicate one-on-one with his closest allies and is a nice chance for some bonding and character pieces.

The solution to the problem is classic Flash; a hail mary pulled from the deepest part of his scarlet underoos. Grabbing the speed McGuffin that was tricking the Speed Force into thinking Barry was being held within it’s prison, Barry throws it at the nuclear explosion causing it to destablise and just vanish? Yeah, that’s a real old school comics way of dealing with a problem but given how it fits perfectly in with the episode’s vibe as a whole, I can forgive it.

Barry is laid up in the aftermath, his speed utterly spent and promising to take it easy so that sets up next week’s episode. Jay also announces his retirement but he won’t leave Earth-3 sans speedster, promising to train up a female replacement! To my knowledge, Jay never had children so it’s up in the air as to who this could be but there’s been a couple female speedsters debut in the past few years so maybe it’s one of them!

We also get another cameo from Mystery Girl, being decidedly more sinister than previous appearances. Not sure why, maybe she has beef with Frost and Wells? I guess we’ll find out eventually!

Overall, this was a pretty good, stand-alone episode that could have taken place anywhere in the season but allows a nice breather from all this Thinker nonsense. Next week, we go Freaky Friday as Iris and Barry’s “We’re The Flash” mantra takes on a whole new twist in Run, Iris, Run!