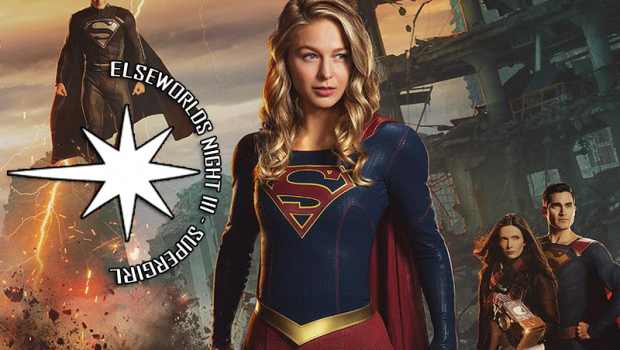 This episode kicks off with a bang as Ollie and Barry have to contend with a fully deranged John Deegan, now Earth-1’s Superman, black suit and all! It’s a pretty terrifying prospect but he also nicks the opening monologue! THE FIEND!

The whole thing has shades of the Injustice video game about it, or the flashforward/dream sequence in Batman v Superman which also ripped off the Injustice aesthetic, but it’s an effective way to show how boned Ollie and Barry are, especially when they learn that everyone they could rely on isn’t going to help them. Unless they do, like Cisco because they kinda need him to jump dimensions so sure, he’ll help them.

Speaking of dimension-hopping, Ollie and Barry come face-to-face with The Monitor and his whole demeanour is great. LaMonica Garrett has been fantastic any time he showed up. Enigmatic to a fault, The Monitor still has a playful lilt to his voice that indicates that this test isn’t meant in malice and he is genuinely surprised at how our heroes adapt.

So much so that he appears to offer Ollie a deal in order to keep Barry and Kara from not dying, as foretold in the Book of Destiny. What that actually means will remain to be seen but I can see it as a way for Stephen Amell to leave Arrow should he wish to.

Can I just give some love to Tyler Hoechlin? Because he’s a great Superman. And a great Clark Kent. And a great Evil Superman. He’s just a really good actor who gets the character and that chin is chiselled as FUCK! What a handsome lad. But yeah, he’s got great bits throughout the 3 nights but his best spots are in this Supergirl episode, where he finally proposes to Lois after learning they’re going to have a child. Good for them!

The Super Friends continue to have a really fun chemistry and it’s gonna be sad when they go back to their own shows and I have to listen to the same tired shit from The Flash again but that’s 2019 Sharp-O’s problem and that bastard deserves it. He knows what he did…

Deegan is defeated, even gaining a brand new skello-face to match his comic book counterpart; Doctor Destiny. Yeah, I didn’t mention that before because he’s kind of a jobber villain, mostly known for his appearances in Neil Gaiman’s Sandman comics and the two times he was voiced by William Atherton in the New Batman Adventures and Justice League cartoons.

We also get some parting words from Batwoman about Deegan being incarcerated in Arkham and her concern about his new friend; Psycho-Pirate.

Words have power and there are few words in the DC Universe that inspire both awe and terror like those above. I’ve thrown the word ‘Crisis’ around a lot during this crossover, even capitalised it, that’s how important it is, because Psycho-Pirate’s final words are a portent of doom in the DC universe and foreshadowing for next year’s event which may mean the end for more than one of our heroes.

A Crisis is coming and universes will collide. Worlds will live, worlds will die, and nothing will ever be the same again.

And that’s Elseworlds! A thoroughly enjoyable romp over three nights and probably my favourite of the CW crossovers up to this point. It was funny, intriguing, and set the stage for the biggest name in DC events which will no doubt see Black Lightning come into the fold. And if you’re wondering where the Legends were during this whole escapade; let’s just say there was an incident involving Constantine, a cat, the Puppets of Tomorrow, and time being repeatedly shattered. So that’s why they had to cash in a rain check.

That’s all from Flash Facts until mid-January 2019 so I hope you all have a very merry holiday season and I’ll catch you guys next year!