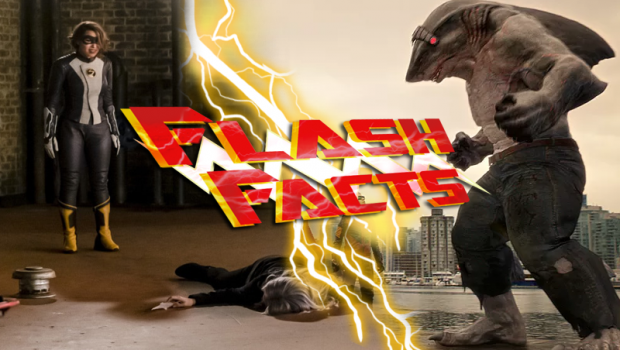 Flash Facts – “Cause and XS” and “King Shark vs. Gorilla Grodd”

Definitely a 50/50 split on quality between these two episodes.

Cause and XS sucks.

It sucks a colossal bag of dicks. Why? Because this is the third or fourth time we’ve had a time loop plot in an Arrowverse show and I’m real fucking tired of it, hence why I didn’t review it. I was banking on the next episode being better so this article isn’t just a solid paragraph of me giving out and having a moan because I don’t like not liking this show. It can be so much better than it is most of the time but, much like Arrow was for a long time, it’s trapped in it’s own tropes and the current writing team don’t know what to do with Speedsters except a set number of plot lines.

Shout-out to Carlos Valdes because he always gives a great performance when he has to handle Cisco’s trauma. It was the only thing in the episode I liked.

King Shark vs. Gorilla Grodd on the other hand is an improvement. I mean, it’s still not great, but it’s infinitely more watchable.

Glad to see Jesse L Martin has recovered from his back injury. He has been sorely missed and wastes no time in sorting out Iris’s fear of her office? ‘Kay. She broke into Cicada’s house and stabbed him with a pen but she’s scared he’ll show up at her office? Does she not have pens there?

The “Beauty and the Beast” angle they’re taking with King Shark is kinda cool, it’s just a shame that the show couldn’t afford to have him all Sharky for more of the scenes because he’s dummy thicc and the clap from his ass cheeks is alerting Gorilla Grodd. (I love David Hayter so much for that)

Dan Payne (who also played a young Obsidian in Legends of Tomorrow) does a great job of being a huge lad for King Shark’s human scenes and works well alongside Zibby Allen’s character, Tanya Lamden. The CGI for the fights is as cheap as you can expect but it’s used sparingly and to good enough effect though it does get worse as the fight with Grodd goes on.

Nnf. I’ve been waiting 2 and 1/2 seasons for someone to do that and it’s just as satisfying as I was hoping.

So that’s that for now, kinda lost steam near the end due to personal stuff but I’ll be back next week when they’re finally going to deal with Cicada. Or try to at least. Next time: Failure is an Orphan.