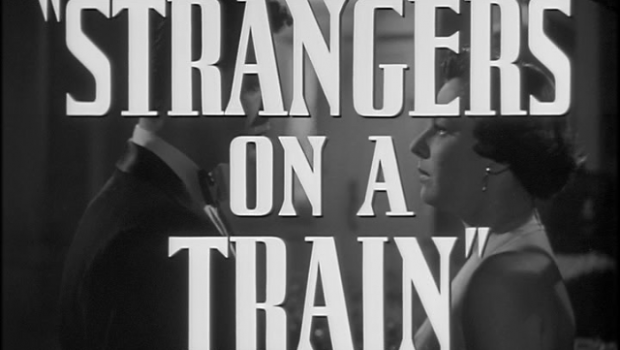 Greetings! This month we will look at Strangers on a Train. As a reminder, I have never, ever subscribed to the cliché that the book is always better. Cliches are for folks whose philosophies may be summarized in the space of a tattoo. In fact, most often, unless one or the other TRULY SUCKS, I will offer my impressions of both and let you, dear reader, decide what suits your mood.

Hitchcock’s thriller gives you Bruno Antony, a villain you can hiss at and Guy Haines, a victim you can root for, along with his pretty dame, Anne. Importantly, his Bruno is a creature whom you will be allowed to hate, because he is nothing like you. He’s impish and lurks unsettlingly on national monuments. If you want a sleek, gorgeous black and white film with sleek, easy black and white ’50s morality, this is for you. It even boasts a cringe inducing (if you have the volume up as high as I inadvertently did), breathtaking carnival crash. It has signature Hitchcockian innovative camera work, such as a murder viewed in the victim’s discarded glasses, a visual trick both poignant and impressive. Hitchcock’s Strangers on a Train is escapist fun designed never to challenge you, because only psychopaths have blood on their hands, and you would never be a psychopath, right? My only complaint about the movie is that Raymond Chandler’s spare screenplay admits none of his brutal poetry. Chandler himself haaaaated the finished product, and expressed his disgust with Hitchcock and the whole affair in a delightfully chewy letter, which you can read here:

While I don’t think Guy qualifies as a hero in either version, Highsmith demands you decide if he might be a villain, and when. Be prepared to ache for him until you turn the page and yell at him to just “suck it up like a grown up, for fuck’s sake! We all have to face the loss of positions and relationships hard won!” Then maybe you’ll ache for him again before your next bout of frustration. Highsmith prompts you to revile Guy, at times, and feel some modicum of sympathy for Bruno, even while you wish he would simply disappear down a drain hole or out at sea. Be prepared to find the psychopath is capable of the dearest loyalty out of a swath of so-called normal citizens. He hates and loves in high degree, unable to alter his feelings or their consequences once they’re set in motion. This quality causes him confused anguish and provides you with really juicy storytelling. Just imagine, a sympathetic, not to be confused with charismatic, psychopath…

The choice between the book and the movie thus boils down to whether or not you are in the mood to have thoughts that look like this: If good and evil are fluid, ambiguous states of being, then that must render the labels “good” and “evil” infantile in a world where a “good” man can commit an “evil” act. Right? Or is a man’s character revealed by his actions? < ---Is this lazy thinking? Will it completely fuck with you if you wonder why two people can do the same thing and not boast the same character? Then put the book down, pop some popcorn, salt, and let Hitchcock give you a ride on his wild merry go round. Oh, and trains...Hitchcock will give you lots of trains so you never forget that at the beginning of the movie two strangers met there. Who knows the straight poop? Hitchcock’s daughter, Pat, that’s who.

Please do read any book by Patricia Highsmith. Just do. She’s delicious, and I adore her cast of completely unloveable characters. You’ll want to hit them all with rocks.

Also, please read about the genius herself. She’s my nasty spirit animal, the person I would be with talent, pet snails and the ovaries for full blown misanthropy:
The Talented Miss Highsmith by Joan Schenkar (St. Martin’s Press 2009): Patricia Highsmith Tags: elizabeth neal, hitchcock, movies, strangers on a train, the blank was better