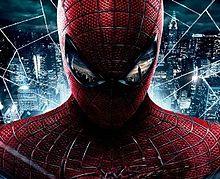 I have deliberately been avoiding stuff for the new Spider-Man film. Not because I’m prejudiced against the movie, I would love nothing more than to have a great Spider-Man film, but because I was burnt out.

The previous 3 Sam Raimi efforts left me cold for Peter Parker’s exploits on the big screen. With Marvel doing so well with their own productions I just wanted Sony to release the rights and let The House of Ideas do it themselves.

I’m tired of seeing characters be misrepresented on the big screen. I’m not a “you raped my childhood” sort of geek. I understand I can’t control every iteration of a character. New versions don’t ruin the old version for me. Sometimes changes are great too, just look at the Ultimate line of comics and the success of the Batman movie franchise currently. Everything is gravy as long as you get the character’s principles and ideals correct. I don’t care about costumes or anything, just get his personality, his beliefs, his reason for being, right.

Simple, isn’t it? Not much to ask for.

Ang Lee’s Hulk is a prime example of somebody getting it wrong. He changed the reason why Banner became the Hulk. He made the catalyst an experiment gone wrong rather than Banner throwing himself in harms way to help an innocent boy. Taking away that heroic effort completely changed the whole premise of the Hulk and the movie was just a series of miss-steps from there on in.

Get the basic stuff right and it will be easier from there.

For example, the recent Captain America movie got it pitch perfect. Steve Rogers was just a man who wanted to do the right thing. He wasn’t perfect. He wasn’t craving action or enacting revenge. He just wanted to give his life for his country because it was in danger. When they made that movie they understood what kind of character Steve Rogers was and everything fell into place from there.

How does this relate to the Spider-Man preview I’m about to review? Well I started to get on the bandwagon for this flick for the very same reasons I enjoyed Captain America. It looked like they were getting the character right. He was wise-cracking against crooks, he was building gadgets in his bedroom, he was an outcast in his personal life. They seemed to get who Peter Parker is and maybe things will work out in the movie.

Sure, all I can go on when I do these reviews is about a minute and a half’s worth of footage. I can never make a stone-wall assessment that a movie will be good or bad based on the trailers but I can pick out certain bits that will hopefully give us a good idea of what is to come. Little things will hint to the quality.

On that note, we have a great opportunity to ponder what The Amazing Spider-Man will be like now that a 4 minute preview has been released. Some things in this extended trailer made me happy, some things made me laugh, and some things made me cry. I don’t think it was meant to make me cry.

Take a look yourself and then we will get into this extended review.

Do you know what I have a problem with? You should. It happens about 30 seconds in…

There are certain things about Peter Parker that never change.

He is a nerd.
He somehow gets amazing attractive women despite being a nerd.
He likes to mouth-off when he’s in the mask.
He loves his Aunt May.
He doesn’t take the mask off.

There is only one story where Spider-Man takes his mask off to a stranger that will ever remain in continuity (they’ve had him take it off in front of people before in the comics but they always retcon it soon after) that story is the legendary “The Kid Who Collects Spider-Man” and is a classic of high poportions. It’s a classic for a big reason, Spidey never does this. The only reason why he does it is because the boy is his biggest fan and will soon die of leukemia. It’s an amazingly touching moment for many reasons but mostly because it’s the highest honor Spidey can think of. Nobody sees his face.

The reason why Spider-Man is so private about his identity because his whole reason for being is seeing a loved one die when he could have prevented it. With this in mind, he would never risk anyone knowing who he is and telling the tale because it puts his whole family and loved-ones in jeopardy.

So, this brings me to:

Listen, I’m not heartless. It’s a nice moment. Peter lets the boy put on his mask so that he can feel brave like Spider-Man. It works as a scene. It’s sweet. The only problem is, to make it work you have to throw away one of the fundamental points of Spider-Man’s existence.

Spider-man is presented with a problem of a screaming child who is scared because he doesn’t realise Spider-Man is there to rescue him and Peter’s first reaction is to quickly rip-off his mask and expose his identity? What? Have you not read a single issue of the source material? This is not a good idea.

It is ridiculous and proves a very basic misunderstanding of the character and this worries me.

The Lizard is a cool villain. It’s a little bit of Jekyll & Hyde and werewolf all mixed together in his drama and identity.

In some scenes he looks bigger than others and he is sometimes in danger of looking like a bad rubber suit but overall I’m excited to see him come to the big screen for the first time.

Hey check it out guys, Peter is totally gnarly and cool.

You could easily tell me to “get over it” or “don’t turn this into the Muppet/fart shoes fiasco again” but trust me when I say that little things like this will matter in the long run. It’s a bad sign. Sure, it may just be a small blip and everything else will be great and I really hope that’s true. But if it’s not, if this movie sucks balls, then you’ll know why. They just didn’t get it.