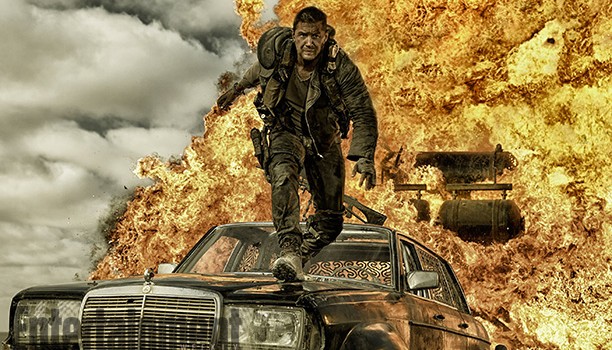 We’ve been almost inundated the last few weeks with trailers of old franchises. Star Wars, Jurassic Park, Terminator, and now Mad Max. One of the differences with Mad Max though is that the original writer and director George Miller is back with this sequel.

It has been over thirty years since Mel Gibson first played the titular character in the post apocalyptic desert. Somewhat understandably he has been replaced with the younger, fitter, Tom Hardy in Fury Road.

Weirdly, George Miller went from making Mad Max to Babe: Pig in the City and Happy Feet. So it’s an unusual switch back and forth through genres. I somehow doubt we’ll see a dancing penguin in this trailer but keep an eye out just in case.

I always think you know a film means business when it shaves the head of a female Oscar winner. I don’t think there’s going to be a lot of slapstick in this action film.

– This is not Mel Gibson

I checked. He looks quite a bit like Mel Gibson. When I first saw him I thought “hey! that’s Mel Gibson”. But apparently no, it’s not Mel Gibson.

This is a good concept. The idea that all these maniacs in cars are trying to hijack other trucks and cars could have been executed in any way but these poles are both clever and a great visual.

– Storm in a Teacup

Ugh, so remember there was that one moment in the new Terminator trailer that made me worry about everything? This is that moment again. Everything looked really impressive until the CG party started.

Overall: Despite my despair at ridiculous CG storms, I have a lot more faith in this being good than I did Terminator Genysis. The cast is legit, the source material is from the actual source, this could be a hit.