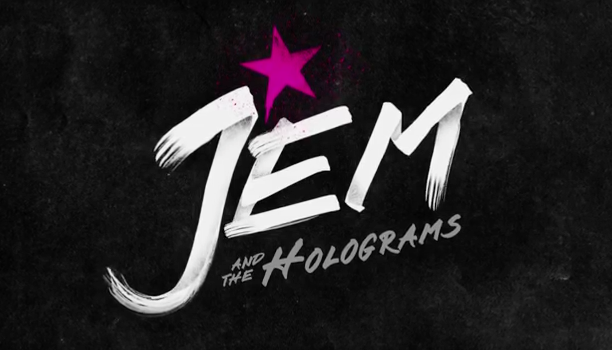 I normally use a couple paragraphs before a trailer to explain the story and who is involved. I’m going to attempt to do that but I’m kind of worked up about this particular one so I’m also going to try and make a point while I’m at it too.

Hasbro wanted to create a line of toys aimed specifically at young girls with a tie-in cartoon during the mid 1980s. They had essentially wrapped up the boy-toy market with GI Joe and it’s connected cartoon series at the time. They approached writer Christy Marx who not only created Jem and The Holograms‘ whole concept but also wrote 23 of the 65 episodes. This was a cartoon made for girls by a woman. Sure, lots of men worked on the show, plenty were hired as staff writers including none other than Paul Dini but Christy was the head honcho.

This adaptation, made 30 years later, was written by Ryan Landels and directed by Jon M. Chu. There was no woman involved in the creative process in a high position. In 2015 a movie for young girls had less involvement from women than a cartoon series in the mid 1980s.

Think about that for a minute, then watch the trailer, and then read my rantings below.

I may end up using the word cynical a lot during this article. This is that first moment of cynicism within the Jem trailer. Internet fame/whatever is considered real fame as opposed to internet fame. Which, by the way, is a really outdated thought process at this point. The internet is real life now, there is not much of a disconnect between the two anymore but I’m getting side-tracked here. Fame seems to be an important part of this movie. Specifically the desire for it and the trappings of it. Neither are new subjects and neither are particularly what I’m looking for in a Jem & The Holograms movie.

I’m a fan of Juliette Lewis as much as the next person with a brain, but her character’s inclusion in this story is part of what I find a little bit sinister about this adaptation. In the original cartoon, Jerrica was the head of her own record label. She was literally her own boss. That gave a large amount of both independence and power to the young woman and was part of why the show had such appeal to the young girls who watched it. How often did they get a chance to see a peer call the shots? Now, while there is still a woman in charge, it’s someone who is (seemingly) trying to influence Jerrica negatively. Trying to tear her away from her friends and trying to get her to embrace some of the selfish, egocentric sides of fame. Not much empowerment there.

I’m not really sure what Synergy’s role is in this new Jem universe. In the cartoon it was a conduit for Jerrica to be able to hide her identity and become Jem. It used holograms (hence the band name in case you weren’t paying attention) to create the Jem persona. This allowed Jerrica the benefits of her dual life. Being able to enjoy the fun and adulation of fame while still being able to go unrecognised in her personal life as Jerrica. Hence, again, the original appeal of the show. Jerrica really did have it all. This version seems to paint her as more of a tragic figure. Someone who has to learn how to deal with the negativity of modern celebrity. So, I ask again, what does Synergy do in this film?

– ARE YOU NOT ENTERTAINED?

But I think we can all agree that the best part of the cartoon that we all remember growing up was the heart-wrenching moments of emotion as Jem struggled to come to grips with her life. Right?

Overall: I know it’s stupid to make a million assumptions about a movie based on what is a second trailer for it but if we haven’t seen this sort of film a million times by now it wouldn’t be so easy to predict. Based on everything that Jem and The Holograms has presented to the public thus far to get people to watch it, I can only say that they don’t have a clue why anybody watched the original cartoon. Nor do they probably care.
This story, from what I can see, has no empowerment for it’s viewer. Just warnings. Warnings of fame. Warnings of success. It doesn’t make me want to start a band and have adventures. It makes me fear it. There is no fun to be found here. And also no Misfits.

Tags: jem, seriously where the hell are the misfits?!