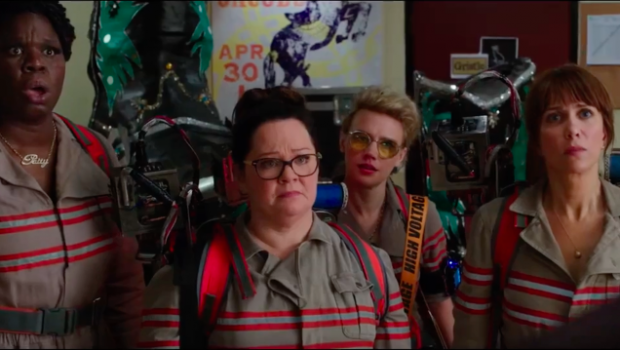 Welcome to the angry man-baby’s enemy #1 this year. OH NO! WOMEN! They’re standin’ on their own two feet and ringin’ on their own bells. Sisters are doing’ it for themselves. They must be stopped!

If you’re one of those people, we have no time for you here at DOOM Towers. The dungeon is where we put the likes of you. It’s not a nice place. It’s where we keep the cast of Hands Down.

However, we are movie snobs and we want movies to be great. The first trailer looked OK, it had about three moments that made me chuckle which isn’t a bad return. But with all the hate surrounding the franchise right now, how does it respond?

It’s interesting that the general focus of this trailer is much more on the ghost elements of the movie and less so on the characters, as the last one was.

The “I think you girls can handle it” feels very much like a knowing nod towards the hatred they’ve been getting online. I could be thinking too much into it, but it’s clever either way.

There are plenty of elements in the trailer that lend itself to merchandising and future amusement park rides, but I’ll be damned if I don’t see this available for cars.

Maybe I’m wrong, but Hemsworth’s possession by a ghost feels like a big moment in the film. Maybe it will be a short scene but between it and the shot of everything blowing up around him while he looks creepy… I don’t know. I could have done without knowing it.

This is a much more colourful film than the originals. Even down to the jumpsuits. Everything seems to… glow. And I like a lot of the ghost designs too. It makes everything feel like a cartoon and considering my love of the cartoon as a kid, I’m cool with that.