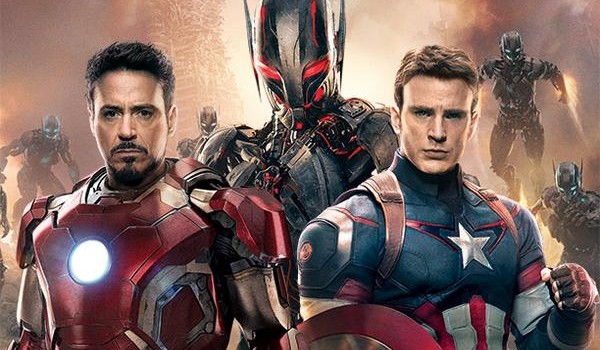 Avengers is currently the third highest grossing film of all time. It made $1.5 Billion in the box office. I think it’s fair to say, it did OK. So, a sequel was never going to be far behind. Come Age of Ultron‘s release in April 2015 it will have been 3 years.

It’s hard to tell if this is Ultron’s first appearance in the film (everyone seems pretty shocked about it) or if it’s a return from being smashed up. Either way, it’s in bad shape.

By the way, did you see Rhodey in the background? Nice to see him hanging out with the big boys!

Wanda Maximoff has a sordid history in the Marvel Universe. A lot of writers have been very cruel to her. It seems that her luck hasn’t changed much.

Having said that, this is Whedon. He knows how to write women (I recognise that’s a dumb phrase to say, but lord knows there are too many people out there who can’t write women properly). I’m sure The Scarlet Witch is going to have a great role to play in this story.

Lets face it. We were all dying to see this. The Hulkbuster suit.

People have been hinting at this thing happening since Iron Man 2. There are going to be a lot of nerdgasms.

Ok, so I know this is a tiny thing, and I recognise I’m a bit of a loser for spotting it but…

You may have seen an alteration to Hawkeye’s costume. No? His coat is longer and flaps about. Yeah, you see they gave him is old design: Alright, alright. It’s not exactly the same but still, it’s little touches and references like this that makes this Marvel fanboy happy.

Overall: While the trailer doesn’t give away an awful lot (still no Vision and who the hell is Andy Serkis?) but it still has lots of little details to digest (Cap’s broken shield and hey, look, it’s Andy Serkis!).

This movie is not a hard sell, we’re all dying to see it. As long as the trailers don’t damage that status, and this one certainly doesn’t, then Marvel are due to break records all over again.