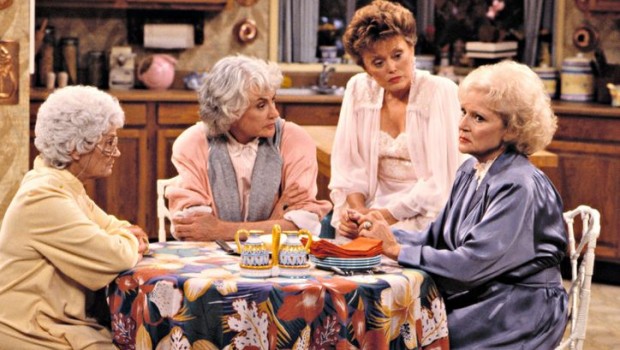 This time on They Don’t Make Them Like They Used To; I started writing an article for a completely different theme tune but got this one in my head (for the bajillionth time) and considering it’s one of my favourite ever themes I just had to start again.

The Golden Girls is a true classic of sitcom television. One of the few shows to be based solely on 4 women, and women of retirement age, it bucked a lot of trends on TV. None of the actors were particular stars, although Bea Arthur and Betty White were both well respected actors and comedians. To say that this show would be lucky to see the light of day now, in a industry obsessed with “young and sexy” talent, would be a major understatement.

Despite all that, or perhaps to spite it, The Golden Girls became a huge hit and it’s down to some great comic writing (that stands up to this day) and wonderful performances from the whole cast. In fact, the girls are so good on the show that whenever they have other performers guesting, you can see a real gulf in the quality between the stars and the guests. A lot of the men, who pop up from time to time, are often cringe-worthy in comparison.

The song’s lyrics sum up one of the core aspects of the show and that’s the security and love found within a solid friendship. This is something that women especially excell in more than men. I don’t think any kind of “bromance” really offers the same amount of support that women give to their best friends. And the whole premise of The Golden Girls is that at the end of the day the only people you can rely on are your friends and it nails this message in each episode to the point where I wish I was hanging out with these 60 year old women in Florida.

The song is one of those “must sing-a-long” sort of tunes. The melody is delightful and the lyrics are so easy that even after 20 odd years I’ve never forgotten them. In fact I’ve sung them to friends on many a drunken excursion.

If you haven’t revisited the show in years I advise you to do it. It holds up perfectly and can make some great day-off viewing.