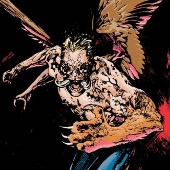 Time to play catch-up on New 52 trade releases this week, beginning with DC’s premier super-team, the Justice League of America! (Or simply Justice League as it’s been known for years.) And what holy terror besets our intrepid heroes in DC’s grand rebirth?

The New 52! Taking no risks whatsoever!

Basically, imagine The Avengers movie without the Joss Whedon-y dialogue, humorous character interactions, or threatening central antagonist and that’s basically what you get with Justice League Vol. 1. Now, that’s not to say this book is without its own unique charms. As an introduction for new readers, the book does a great job of introducing each character, distilling their essence (Batman’s moody and grim, Green Lantern’s a self-obsessed showboat, Superman’s a boy scout, etc.), and establishing their relationships. There’s actually quite a few good moments here, such as Wonder Woman saving a little girl who entrances her with the miracle that is ice cream, and Hal Jordan mocking Aquaman for having the lamest powers only to have Aquaman show him up in the most badass fashion imaginable. I would recap the plot here, but, honestly, there’s not much point given we’ve seen this so many times before: Aliens are doing alien-y shit around the world; superheroes start cracking wise to their shenanigans and investigate; circumstances bring our heroes together, they tussle about because God forbid any two heroes should meet without treating each other like dicks before begrudgingly working together (you don’t have to emulate everything Marvel does, DC); united, our heroes confront the aliens, defeat the aliens, foreshadow future conflicts with a greater enemy; and celebrate victory by recreating that scene at the end of Star Wars where Han and Luke get medals, minus Chewbacca.

One odd choice made to the basic lineup of the Justice League comes in the promotion of Victor Stone (aka Cyborg) to a founding member of the League, ousting the Martian Manhunter (who shows up as a member of Stormwatch). Of course, they shoehorned Vic in there so the League would look less monochrome and, frankly, good on DC for diversifying the team out the gate and spotlighting one of their major African American heroes. But Cyborg is a quintessential Teen Titan. Hell, his entire story arc throughout this volume is him dealing with his daddy issues. If DC wanted a diversity hire, then they could have easily chosen one of their other black superheroes like Black Lightning, Steel, or Icon (in fact, with his powered armor, Steel could have easily served the same role in the plot as Cyborg and balanced out the team with his tech-based abilities). But no, Cyborg was chosen because popularity dictated such. It’s a minor quibble from a Wolfman-era Teen Titans fan and, really, better this than retreading his story arc from that series.

In Green Lantern Geoff Johns has proven his talent for crafting epic storylines with interesting ideas behind them, but here Johns plays the formula straight, building tension, upping the stakes, and relieving comedic wherever necessary. In the epilogue we get hints of plots to unfold but little of it relates to the plot on hand, so ultimately Origin may be put down as a skippable affair. Jim Lee’s pencils are…”excellent” as ever, if you’re a fan of his art style. Personally, I’ve only ever thought he was adequate, trading on dynamic framing and detail in lieu of the creativity present with a Travel Foreman or Greg Capullo or the beauty of a J.H. Williams III.

In fact, Lee’s redesigns for every major character illustrate why the man is a workman artist rather than a creator: look no further than Hawkman’s redesign, a veritable…I hesitate to say “treasure trove”…of ‘90s comic cliches, from the inexplicable single shoulder pad to the general over-design and excess detail that ultimately looks cluttered (ironically, he looks remarkable like Magog, a character from Kingdom Come expressly designed to parody these tropes). The most troubling design problem in Justice League comes in Superman’s costume which, minus the red shorts, feels all wrong with off-kilter color balance and Plasticine texturing (the lines supposedly convey plated armor but that’s dubious — and why the hell does Superman need body armor!? He’s Superman!). If you want to redesign Superman’s costume, it has to be a bottom up redesign, color scheme and all. Getting rid of the red underwear and adding random lines does not instantly improve it.

All-in-all, this is middle-of-the-road fare, enjoyable for what it is without exploring anything new to stimulate longtime readers. If you’re new to the DC universe, definitely check it out. If you’re a longtime fan…well, you won’t feel like you’ve wasted your time but you won’t be missing anything either. Okay, so when I said “Taking no risks whatsoever!” I may have been exaggerating a bit. One thing you have to give DC credit for regardless of your overall opinion of the reboot, they’ve taken this opportunity to revitalize older, lesser known titles and characters. Swamp Thing, All-Star Western, OMAC, Blackhawks, Jaime Reyes’ Blue Beetle, and now Animal Man.

As an informative faux-entertainment news article informs us, Buddy Baker is Animal Man, hero, activist, and indie film actor, capable of summoning the abilities of any animal. But unlike most heroes, Baker has no secret identity, he’s happily married with children, and he rarely fights your requisite supervillains. Rather, Baker fights for social justice and the rights of animals. An unconventional hero, to be sure, no doubt resulting in his unconventional portrayals through the years, most notably Grant Morrison’s run on Animal Man’s Vertigo title which turned into a playground for metafictional experimentation. In fact, Morrison’s run more or less proved definitive, making it hard to separate the character from the writer, no doubt resulting in his descent into obscurity thereafter. And then Jeff Lemire happened and all points of comparison flew out the window.

No longer does Animal Man gain his powers from an obscure fragment of alien technology. Now, his ability to summon animalistic powers emerge from a more elemental force known as the Red — counterpart to the origin of Swamp Thing’s powers, the Green. And standing against both the Red and the Green is the Rot, elemental embodiment of entropy and decay, a force all-consuming in its hunger and purely malevolent in its aims. There’s no negotiating with the Rot, only surrender. At its core, Animal Man is a horror title, and the horror here is classic Cronenbergian body horror, à la The Fly and Videodrome. Every turn of the page greets you with some new, twisted grotesquery scarcely describable. Inverted digestive systems, eyeballs glaring out from where they shouldn’t be, bone, muscle, and sinew flowing in and out of each other in fluctuating patterns. With Morrison, the horror drew from the existential with Buddy questioning his very existence and worth as an artificial creation, a character in a narrative subject equally to the writer, artist, and reader, but here the horror strikes purely for the visceral. Wrenching at the guts and testing the strain of your eyes as they grow wider and wider with every image.

The strengths of this title emerge equally from Lemire’s writing and Travel Foreman’s art. Lemire gets you invested in the Baker family, in Buddy’s duelling duties to his family and his cause, in his wife’s grudging acceptance of her husband’s alter ego, in his son’s brattish juvenilia, and in his daughter’s naive discovery of strange, dark forces as her own powers reveal themselves. Indeed, the love between Buddy and his daughter forms the heart of this book, as a father struggles to weather his daughter through a storm, hoping desperately to bring her out all the safer on the other side. Buddy’s plight, while strange and supernatural, strikes at the universal, enumerating the wonders and importance of the bonds between parent and child without becoming heavy handed or cliche. Meanwhile, Foreman delivers the peril with every new unimaginable horror emanating from the Rot, besetting our hero. Not that the embodiments of the Red are any more pleasant. Every image in this book is brilliantly rendered, strangely tactile, and sure to raise gooseflesh across the hardiest hide.

Along with Scott Snyder’s run on Batman, Animal Man stands as one of the strongest titles of the New 52 — hell, I struggle to find anything bad to say about it. It may take a year or two to accurately call this, but hopefully titles like Animal Man will justify the reboot in the end, if only for having such a creative team reinvigorate a great character in a new, terrifying way. A must read for any fan of horror or Animal Man.