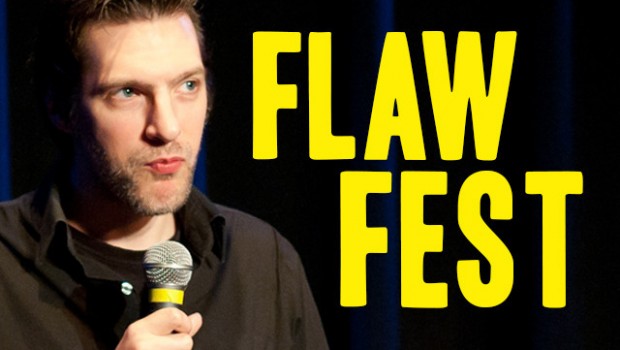 I think I need to start this piece by explaining a few things. First of all, this is not a review, it’s a preview. I’m telling you about something cool that is about to come out but I’m talking from a slightly biased stand-point. I know Joseph Scrimshaw, the comedian who is about to release his very funny comedy album entitled Flaw Fest. We have worked together before, performing rather silly comedy at Atlanta’s Dragon Con. I also contributed to the Kickstarter which funded this hilarious comedy album and accompanying music written by some incredibly talented musicians (some of whom I also know) inspired by Joseph’s side-splittingly funny show. In fact, in the last track of Flaw Fest, where Joseph lists off the names of those contributors, I am the first name listed. It would be underhanded of me to claim that I’m going to critique Flaw Fest from a point of neutrality. But I will tell you how awesome it is because you should listen to it because it’s great. OK?

Also, Joseph’s album Comedy of Doom is in no way connected to us here at The Website of DOOM. It’s just a weird coincidence. The idea of the show is simple. Joseph Scrimshaw lists off all the flaws about himself in front of a live audience. It’s an unusual theme but within it he manages to connect a lot of very different stories. Particular highlights are the tale of how a real live bear ate Gummy Bears from his mouth, a rather bizarre advertisement for eggs, and a song written by him in his teenaged years called Mr Suckface. It’s that song that steers Flaw Fest into the unusual.

Joseph commissioned 10 songs from 10 different musicians. Their only guidance was to write a song based on his stories from the show. It’s heartening to see the wide range of genres and subjects that the musicians came back with. Paul & Storm, Molly Lewis, Bill Corbett, The Sevateem, John Roderick, John Munson, The Doubleclicks, Kevin Murphy, Mike Phirman, and The Dregs all provide great material as diverse as the anecdotes themselves. From Paul & Storm’s 1920s style jingle to Mike Phirman’s dance-rock song about Kaiju it goes to show just how much is going on in Flaw Fest.

Flaw Fest is available now for pre-order on Bandcamp and will “drop” on Tuesday, November 5th. For $10 I don’t think you can really go wrong for what is essentially a comedy/music double album full of the internet’s finest. For a preview check out the introduction and song from John Munson below.