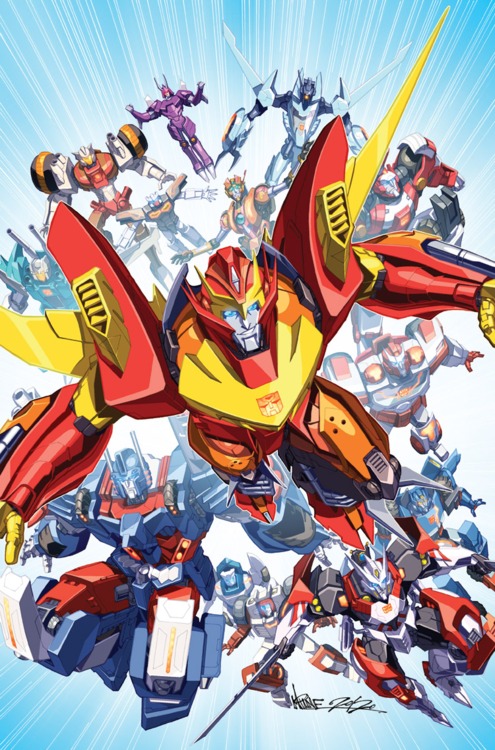 In the wake of the lacklustre Chaos event, IDW decided to split its ongoing book into two. One would be Robots in Disguise, helmed by John Barber and Andrew Griffith and the other would be More Than Meets The Eye, with James Roberts and Alex Milne (Although Roche would do the first issue and the preceding one-shot.)

This trade includes the Death of Optimus Prime one-shot and the three-part story Liars, A To D. The one-shot shows the fallout of Chaos as Cybertron is dialled back to it’s very origins as a primordial wasteland with only a small shanty town serving as port. The war is over and the planet sent out a signal to all it’s children, “Come home.” So while the Autobots are still rounding up wayward Decepticons, thousands of neutral Cybertronians make the pilgrimage home and they’re not pleased with what they find. The NAILs (Non-Aligned Indigenous Lifeform) thought they were returning to a utopia, only to find a barren wasteland and the Autobots acting as an occupying force. It’s all very “War in Iraq” and tensions rise until Optimus Prime leaves. He renounces his leadership and heads off into space, leaving the two squabbling factions within the Autobot camp to their own devices. Bumblebee (interim-leader back on Earth) wants to stay and rebuild society with the NAILs while Rodimus (Former Matrix-Bearer) wants to leave to find the Knights of Cybertron to recover some of their lost heritage. Rodimus is resolute and despite what others think, he finds a willing crew to go on his quest. Geez, that’s just the basic outline of the first two issues of the trade. Hoo-boy. Throughout those two issues, you really get a sense of where the characters are at. Tensions are high, nerves are wearing thin, 4 millions years of war ended in a massive anti-climax and the people they’ve been fighting for want little more than to throw them off Cybertron. The first part of Liars, A To D shows various members of The Lost Light (The irony is delicious) coming together and showing us why we will love every single one of them for the foreseeable future. The launch of the ship feels understated but as an “accidental” explosion launches them into the vastness of space (Leaving the Autobots on Cybertron to think they’re dead) an ominous message falls on deaf ears. From here on, the series really comes into it’s own as an adventurous romp through the cosmos with plenty of laughs, horror and emotional whiplash. It’s also from the second issue of MTMTE that Alex Milne takes over art duties and he does an excellent job of blending Nick Roche’s expressive art with Milne’s detail and imaginative designs. Alex Milne really cemented his place as my favourite Transformers artists when he began this series and he hasn’t disappointed since. The Lost Light is now, well, lost. They find themselves in deep-space and down forty crew members after a hull-breach. They set down on the planet below to pick up survivors and two new crew members, Skids and Cyclonus. Skids appears, oblivious to even his own name, in a mysterious ship that is coming apart at the seams. He escapes the crash only to realise he’s being hunted, as the ships parts seemingly form several sworld-wielding warriors. He works through his amnesia until he works out his own name, function and even his motto (Which he thinks is rubbish, a sly dig at his previous portrayal). Cyclonus is offered a place on the ship after his Heel Face Turn in Chaos and subtly threatens Whirl (whom he caught desecrating corpses last issue) and Skids is found by other members of the crew. Once all are on board and on their way again, Rodimus receives a message from Red Alert (Ships paranoid Director of Security) with grave news:

The final issue of the trade is one big homage to Alien and serves up a big dollop of space horror. I love it when they establish folklore for the Transformers, it makes them more than just robots, that they have their own mythology and deities, something Roberts has been putting plenty of in since he starting writing. In fact, James Roberts’ writing has a lot to do with the success of this book. He builds complex, diverse characters in such a small amount of time, builds worlds for them to inhabit and makes us care when they ultimately succumb to his sadistic whims. Oh, yes. Jimmy likes to kill, maim, torment and goad his characters in all manner of ways but it never feels mean-spirited. He loves all of the characters he uses and makes us love them too.

What I absolutely love about the creative team on this book is that they love to give the fans extras. James Roberts provided so much more material for both releases of Wreckers and Alex Milne has proven time and again to dole out concept work like it’s candy and this trade is no exception. After the four issues, you get a ton of bonus material like cover art, a “Meet the Crew” segment that humorously introduces most of the cast, concept sketches from Milne for various characters and ship locations (plus a look at two characters appearing in the next volume), and a 2-page editor’s comment with “behind the scenes” information about the series which is chock-full of interesting trivia. Not only that but Milne produced a brand new cover just for the trade off his own back, something that he previously did for the Drift miniseries rather than rely on one of the single issue covers. While its sister-book is by no means a bad book but it really suffers when compared to this immensely fun series. It’s a delightful blend of humour, horror and Firefly-esque antics. Between an engaging story, beautiful artwork, brilliant dialogue and characters, and tons of extras, More Than Meets The Eye gives you your moneys-worth and then some. The first volume is available now through all good book retailers and the second volume will be out October 16th (According to Amazon)

As always,  if you have any thoughts, opinions or comments just leave them in the comment section below!