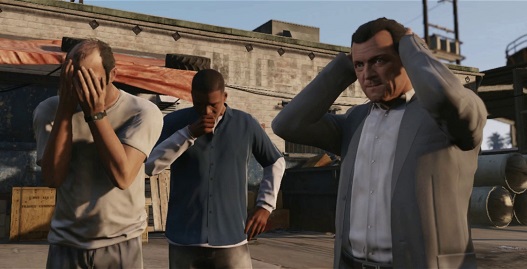 I’ve struggled for a few days about how to approach this subject, and what I’ve settled on is something simple, I’ll start it with a question: When did we all become such hypocrites?

In a future column I’ll explore the dissociative way in which game reviewers pick and choose when to focus on narrative, and when to focus on core mechanics, but that’s not the point of what I hope will be a relatively focused piece today. All I want to discuss right now is the shallow delusions some gamers (particularly gamers with a mouthpiece) carry with them into mature games like Grand Theft Auto V.

From here on out I’ll be spoiling at least one major scene—though I imagine many of you have already either played this scene, or had it spoiled through social media. The scene I’m talking about is, as you might guess, the mission in GTA V when Trevor, and thus the player, is forced to torture a (very likely innocent) prisoner in order to get information for a corrupt government.

When I see a scene like that in a game, or to a lesser degree a film or TV show, I brace myself. The world is filled with what Bill Burr terms the “professionally outraged.” In other words, there are entire careers built on drumming up controversy, then yelling about it on TV or in print.

Now, I have a sociology background, and it’s been invaluable as a writer and a game designer. Not only did it prepare me for data entry and analysis, but also for knowing that every issue is hot button if you ask the right people the wrong questions.

That said, it took none of that training to predict the tweets, headlines and op-ed pieces generated by GTA V. And though I was unsurprised at all the criticism—I have been a little surprised with its origins (and its lack of irony).

It’s a semiotic petri dish. It tells even the layperson a dozen things about the game before they’ve managed to unwrap it from the plastic. If you understand nothing else about the game going in, you know two things specifically:

This game is about felony.

There have been at least four other games like it.

If, however, you’re a long-time gamer, you carry with you the symbolic awareness of the GTA franchise as a sort of poster-child for 1st amendment protection; an argument that adults have the right, and the sense, to choose which games they want to play. Then, once they’ve chosen, they’ll have the awareness to avoid or discard games that make them uncomfortable.

We gaming advocates just spent twenty years fighting courtroom battles that dragged us, and our hobby, directly into the path of congress and the Supreme Court. We fought those battles to prove that adults ought to be allowed to choose which art they consume; to prove that they didn’t need government protection—neither from artists nor from themselves. For the last decade, the Grand Theft Auto series was at the forefront of arguments for and against our medium.

So, it’s hard for me to understand the sudden outcry, especially from gamers, when a game called Grand Theft Auto demands players make morally unsavory choices in the process of the game’s narrative.

There are always complex ideas about ludonarrative dissonance in play in situations like these, but that’s far outside the focus of this discussion. What I will say is this: if any of the three characters in GTA V was going to torture someone, that character is Trevor. Trevor is a sociopath, a psychopath, and a meth addict. If the players make it far enough into the game to reach the torture mission, then they’ve already held the controller while Trevor acted as their analogue during plenty of terrible acts. By then they’ve set off bombs, robbed people and places, gunned down entire buildings full of police—and possibly worse depending on the player’s decisions about Rampage Missions ( these are missions where Trevor gets angry about something petty, like being called Canadian, and then guns down everyone from hipsters to the military).

Most of the characters in GTA V are varying degrees of terrible, but Trevor is arguably the least relatable. If a player makes it far enough into the game to reach the faux-controversial torture scene, they’ve got far more to answer for on their virtual rap sheet than water-boarding.

Some have suggested that their only problem with the water-boarding/ torture scene is that they couldn’t switch away from the character—that they had to actively abuse the rights and the body of the virtual victim themselves. “It should’ve at least let me switch to another character while the act was taking place.”

I’ve already used the word hypocrite once, so I’ll say it softer this time.

I’ve read suggestions from respectable gaming media, and other game designers, telling me that the torture scene had no purpose. These complaints often claim that the moment pulled them from the narrative, that it was too abrasive, that it was exploitative.

But not the cop killing? Not the drive by shootings? Not the prostitution, drug use, or terrorism?

It takes a lot of balls—the bad kind—to complain that the bad guys are behaving too badly for your sensibilities. My first instinct is to tell you to put down the controller and find something that doesn’t make you feel uncomfortable.

In fact, I’d say that’s the point of the torture scene. It wasn’t meant to create controversy—certainly no more than real torture ought to create. It might’ve been included as a reminder that we Western cultures (especially me and my fellow Americans) are happy to let someone do the dirty work for us—but we squirm a little when we’re implicated personally.

Of course torture goes too far. Of course Trevor is a terrible human being with no quibbles about it. Of course you’re supposed to be uncomfortable. Then, if you proceed anyway, you’re supposed to ask yourself a set of difficult questions about your limits. People don’t really like to be challenged this way, so being forced to hold a mirror up to themselves is the last thing someone wants to do after they’ve electrocuted an innocent man—even a virtual one. So, instead of these gamers admitting that they’re hypocritical—that they’ll gladly murder, rob and cheat without qualms—but they draw the line at water-boarding, they point the finger outward at the game designer. “How dare you cross that line? How dare you exploit those themes? How dare you force me into self-recrimination?”

That last one is the worst, by far. Because, as we admit that we’d be ok with it if Trevor did the torture off screen, and we only heard about it—we’re left to face the other fact: that’s exactly how Western culture has handled these kinds of tactics for the last hundred years. From the blind eye we turned as Jews were rounded up into concentration camps, to the wartime atrocities at Abu Ghraib, we just don’t care, as long as we feel safer.

See, I understand the instinct to hide from our dark fears and what we’re willing to compromise. I’m even fairly understanding of the compromises themselves—death and fear of death can provoke some terrible things. But, what I cannot understand, is a monster standing over the dead screaming, “How dare you?”

If the murders in GTA V didn’t bother you, then I have to ask you: why did the torture? Then, I have to ask, if any of the gaps in morality bothered you so much that you were uncomfortable, why didn’t you walk away from the game?