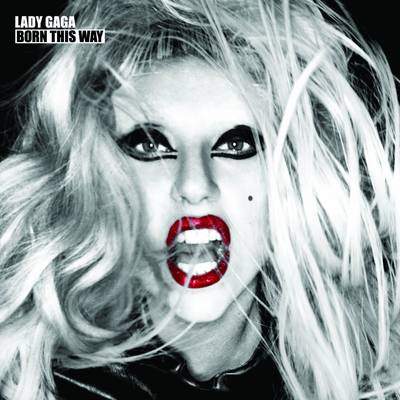 I know she has been a bit of a dividing personality, but I like Lady Gaga. She came along at a time when pop music had become stagnant and bland. In the age of auto-tuning and American Idolatry, we needed a bit of creatively crazy. Like David Bowie and the Ramones, Gaga came along just in time to make things fun again.

I picked up her new album, Born This Way, a week ago when Amazon was offering it for 99¢, and being no fool, nabbed it at once. I have not had a chance to listen to it, so here we go, my first impression of the songs.

For those of you who have not read one of these columns, I will follow the same rules set up by our good friend Aaron Poole. I will write as I listen, so this will be a real-time unfolding of my thoughts. Nothing deep, but my unfiltered impressions upon a first listening. Let’s do this… Marry The Night-
Hmm, starts very power ballad-y then turns into an unabashed dance song. Sounds like it would fit very well in a party compilation album. I can envision a bunch of happy folks jumping up and down to the rhythm. Very club friendly and it feels very ‘90s dance music influenced. Good opening track, not groundbreaking, but a lot of fun.

Born This Way-
Let’s get the elephant out of the room, yes it sounds a bit like Madonna’s “Express Yourself.” I can’t say I care much about that. We live in a culture of remixes and samples, and this is more unique than a lot of what I hear. Songs have sounded alike for a long time, try listening to Chuck Berry’s “Sweet Little Sixteen,” then The Beach Boys “Surfin’ USA.” Now that is jarring.
I think this song is fun, and I like what it has to say. How many people are out there saying that religious people AND transgender people are all awesome? We are all born to be awesome, and I think that’s fun. Besides, this is a stadium thumper, and it succeeds as far as I’m concerned.

Government Hooker-
After a very silly opening, I am going to say something that most people will probably think I’m crazy for even thinking. Slow this track down a bit, maybe drop it a key…this is a Rob Zombie song. Gaga mosh pit! This album is produced really well, without making the voices sound flat. Not sure who mixed it, but they did a good job.

Judas-
So, the other single I have heard. When I saw the video, I thought the song was trying a bit hard, but it fits the mood of the album pretty well. The chorus makes her voice sound really nice. Part of what I like about Gaga is the fact that she actually sings. Still not sure what she is trying to say with this song, but I definitely like it better hearing it in context. Why does pop love Catholicism so much?

Americano-
She took the tune to “Mambo Italiano” for the opening of this track. Odd. Kinda like when Metallica took the song “America” from West Side Story to open “Don’t Tread On Me.” The lyrics have a Spanish tinge, and there are trumpets playing with flamenco style guitar, but the beat is overpowering it. This song could do with a bit less production. I would like to hear the Spanish elements more. Not a heavy misstep, but it could be better. Now we have ABBA style harmonies. Well, that is a welcome surprise. The end gets better, but still not my favorite of the album.

Hair-
“I am my hair.” Yeah Gaga, sing it! I know what you are saying, because I am also my hair! That is what people remember about me. Was this meant to be my theme song? If not, what the hell does “I’m as free as my hair” even mean? Still, I can see driving down the highway with the windows down, singing the chorus no matter how silly it may be. Plus, I am totally my hair. It is way more popular than I am.

Scheiße-
German for “shit,” this should be interesting. My girlfriend tells me that the German spoken over the heavy dance beats is fake. Looking at the lyrics, wow, that is some gibberish. I think some is even French. Still, gibberish spoken over a pulsing beat…not bad. I can see breaking the old glow stick and shaking the old money maker. I suppose you can’t fault her for the fake German; she states she can’t speak the language a few times in the song. It’s a nice hook.

Bloody Mary-
So this album seems to be more dance heavy than the last. “I’ll dance with my hands above my head like Jesus said”? Okay. That is not a scripture that I remember. Still very radio friendly. And very Catholic, with a “Gaga” refrain. I think there may be a through line to this record that I just don’t see yet. Not a bad song, but I can’t see me singing it later.

Bad Kids-
A defiant sounding ditty. Angry club kids need love too, right? I like what she’s saying about being proud of what you are, but this seems a bit simple compared to some of the other songs on the album. I do like the fact she is singing more on this one. My foot is starting to tap. I can see it growing on me.

Highway Unicorn-
I hate taking a long road trip when the highway unicorns get all in the way. They really slow things down. Silly unicorns. Another anthem, but bugger me if I can figure out what she is rebelling against. Have to love a line that mentions bleeding rainbow syrup though. Another song I can see listening to while taking a long drive. Unicorns, drinking, death seems to cover the big life questions, but a bit esoteric for me to hang my hat on.

Heavy Metal Lover-
Shouldn’t a song with the words “heavy metal” have more guitars? Not going to be covered by Gwar anytime soon, but I would totally love to be at the show if they did! I shouldn’t have said that, now that is all I can think of. I so want a Gaga/Gwar tour. That would be the best show ever. So much fake blood. The crowd would be buffeted with so much carnage that I think the weak might even pass out. Too bad this will never happen. Now I am distraught.

Electric Chapel-
Here’s the guitar. Sweet, sweet distortion pedal, why weren’t you in the last song? Actually this song has nice vocals. While I like the fact that Gaga can sing, this album is lacking the ballads that show her voice off. This is a nice change of pace. However, I will admit it is another song that owes heavily to the Madonna albums of the last few years. Not that there is anything wrong with that.

You And I-
The noises at the beginning of this song sound a bit like something out of Wings. I like that. Here is the ballad I have been waiting for. Not all that slow, but a song you have to really sing. Now that it progresses a bit, the sound of this song is a bit of a mash up of Wings and Sugarland, Electric country stomp music is what I shall call it. I am liking the chunky noises that form the bass on this song. I like this a lot.

The Edge Of Glory-
Back to the ‘90s club sound, but more of a modern pop vocal. If the background music was a bit different I could see this being a Pink song. I kinda wish the arrangement was a bit less generic. I wouldn’t end the album with this one, just because it is not particularly unique to her sound. I don’t think saxophone when I think of Lady Gaga. Not a bad song by any means, but any performer with a strong voice could sell it. I can see singing it in the shower, though, and having a perfectly nice time.

Final thoughts? By no means as defiantly sexual as her last effort, but a fun disc. I can see it growing on me. I envision myself throwing back my head, singing about being as free as my hair. If you like her stuff, pick it up, it’s fun. If you don’t, then why are you reading this far down? Have you no life? That is okay, because baby you were born this way. (too much? Ah well)