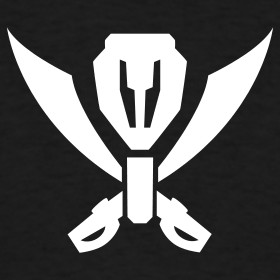 An Introduction to: Kaizoku Sentai Gokaiger Kaizoku Sentai Gokaiger is the 35th Super Sentai series, a series with a long history running just as many years. Many of you will be familiar with it’s American counterpart Power Rangers, a show that utilises footage and themes from Super Sentai. In much the same way that Kamen Rider Decade is a celebration of the Kamen Rider franchise, Gokaiger celebrates the thirty five years of Sentai.

The series follows 5 young space pirates (later to be joined by a sixth) as they search for the universe’s greatest treasure and find their way to Earth where they believe this treasure to be. On their way, they must contend with the evil Space Empire Zangyack, the privateer Basco and sometimes even the very sentai teams they borrow power from.

This hearty pirate crew is made up of: Captain Marvellous, the young captain of the Gokai Galleon and team leader, GokaiRed.

Don, the timid ship’s cook and mechanic who prefers the nickname ‘Doc’ to his real name. GokaiGreen.

Ahim, the pacifist princess from another world and the least experienced pirate. GokaiPink.

Gai. The only Earthling on the team, a Super Sentai fan boy and wielder of the powers of GokaiSilver. The fight scenes and stunt work in this show are something special. They’re enthusiastic, lively and, as Marvellous himself would say, ‘showy’. They’re well choreographed and only use special effects and wire work for when they’re actually needed to showcase the unique powers of each team they borrow power from which brings me onto the main gimmick of the series.

Marvellous acquired the ranger keys from AkaRed, the spirit of all Red Rangers and uses them to combat Zangyack. While some of the older suits and gimmicks are very out of place (It was the seventies, what do you expect?) it’s still interesting to see the pirates transform into multiple teams in a single fight. Given that not all the teams share the same colour schemes or even the same gender layout, you do get the odd occurrence when GokaiGreen becomes a black-suited ranger or GokaiBlue takes on the powers of the female of a group (minus the skirt on the costume).

Coming onto costumes, I have to say that I adore the Gokaiger suits. They’re suitably pirate-themed, with hat motifs on the helmets and, as my friend Kasey said, some pretty bitchin’ jackets. They have fast become my favourite suits of Sentai/Power Rangers. Their civilian identities are also pirate themed with only Ahim and Gai wearing something other than an old timey colour-coded jacket.

Whether you only have a passing interest in Power Rangers or an old time fan of the show, I highly recommend checking this series out because just seeing the Gokaigers transform and fight as the Mighty Morphin’ Rangers is really fun and nostalgic.

Let me know what you guys think below!