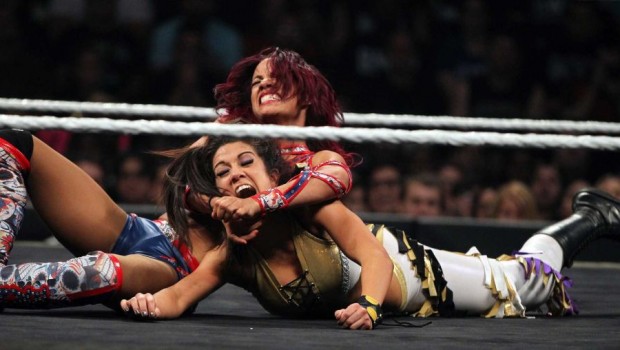 Being a wrestling fan, it’s a common situation to find yourself defending why a grown man can be so passionate about what is universally considered a dumb form of entertainment. Over the years, I think I’ve distilled my love for “sports entertainment” down to three main facets. Today I’m going to try and share that with you, either to help you understand or to give you a quick reference guide should you have to try and make someone else understand.

The Passion of Indy Wrestling:
Example – Grado and ICW

At the very base level, indy wrestling is a perfect example of doing something despite every bit of sense in your body. These wrestlers are performing for little or no money to small crowds in run-down venues. They’re literally putting their body on the line for barely any reward. So why do they do it? Passion. Passion for the business, passion for the art of it, and (if they’re lucky) the passion of the people watching. Scottish wrestler Grado is a perfect example of this.

Grado comes to the ring with the entrance music of “Like A Prayer” by Madonna. This, as you know, is not exactly the coolest song for walking to the ring but Grado has become so beloved by the ICW crowd that grown, angry, rough Scottish men sing their hearts out to it. Only wrestling can inspire such devotion.

Grado will be the first to tell you that he’s a mediocre wrestler with the body like a sack of spuds. So why is he so over? If you want to learn a little bit more about his story and get a good feeling for the independent wrestling vibe this 45 minute documentary is a great taster.

It’s rare when it occurs, but pro wrestling is one of the few forms of entertainment when the crowd can effect what happens while it happens. If the crowd boos, the performers know they need to change things (unless, of course, they’re aiming for the boos) and vice versa. But what I particularly love is how a wrestler wins a crowd over.

And here is the thing; there is no guaranteed formula. Many promoters and wrestlers will tell you that there is a way to do it, and you can get a guy liked by a crowd pretty easily but to make them loved? It’s magic.

Daniel Bryan won the crowd over by working twice as hard as anyone on the roster. He was seen as a mid-card highlight and not much else by the backstage bosses. The crowd got behind him and made him impossible to ignore. You could feel a momentum that was out of WWE’s hands. The powers-that-be tried to fight it, and god knows it got ugly at the Royal Rumble, but they eventually had to give in. And THAT is when wrestling is beautiful.

Randy Orton vs Batista vs Daniel Bryan – WWE… by dankarta1998

He originated the term “pipe bomb”. He was the voice for the voiceless. He saved us from one of the worst ever periods of WWE wrestling. When CM Punk sat down at the top of the entrance and gave his infamous 4th-wall breaking promo he changed everything. He put words to the frustration that all the fans were feeling and became an instant icon. His feud culminated with a Robin Hood scenario of stealing the title from Cena and giving it back to the fans. It was perfect.

When Wrestling Is Done Right
Example: Bayley Vs Sasha Banks

I openly wept when Bayley won the Women’s championship belt from Sasha Banks. I knew it was coming, you could feel it from the very moment Bayley beat Emma on NXT and gave a promo about wanting to win the belt. It was a typical wrestling story, it’s nothing we haven’t seen before. They told it over the course of nearly two months. I cared. They made me care. They told the story in the ring. The whole thing was perfectly executed. It is wrestling at it’s finest. Even if you hadn’t watched any of the build up, the title match itself was enough to win anyone over but once you know the background? Forget about it!

And if you haven’t seen the post match interview with Bayley and her family, grab a kleenex and press play.

This is how I fight anyone who thinks wrestling is dumb. Look at the tears rolling down that woman’s face and tell me it doesn’t mean something.

Their rivalry culminates tonight in a 30 minute Ironman match. It will no doubt be the match of the year. It’s a perfect time to introduce a friend to wrestling. Give it a go, if they have any doubts, feel free to point them towards any of the above.