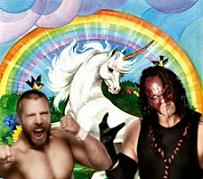 Another Monday, another Pay-Per-View event under our belts. Last night saw the WWE host their Night of Champions event and without giving any spoilers away, it was OK. Nothing spectacular but some good matches and nobody went to hospital (get well soon, Jerry).

As I watched I realised there were a few things I’d like to mention today and they’re just general musings on what the WWE are and could be doing. While these are my random thoughts, they will contain some info on last night’s happenings so if you haven’t watched the show yet, come back after you have!

After Jerry Lawler’s recent heart attack live on air, there has been a massive out-pouring of sympathy… for Michael Cole. Jerry too but it’s most interesting to see that everyone has taken a shine to the usually hated Cole.

Michael gave a professional performance during understandably tough times last week on RAW and has rightly be receiving praise for it. He has appeared on news networks talking about the issue and correctly dropped the heel angle while doing so.

I was unsure whether or not the heel character would return for last night’s show but it seems my answer came in an unexpected form. Yes, it seems John Layfield (AKA JBL) is going to take over the reins as guest announcer for an unspecified amount of time. It appears WWE can’t go for too long without a cowboy commentary.

He did a good job too as the heel colour commentator. He gave Cole a run for his money on more than one occasion. Cole seems to now be taking back his old role as face announcer and I couldn’t be happier.

I’ve said for a long time that you can’t have a heel as a head announcer for a number of reasons. If your head announcer is the man most constantly in our ear, then he can’t be the contrary voice as the listener will transfer it’s feeling of anger to the commentary on to the product. Heel comments from a second guy can enhance a product as short comments can be thrown away or laughed at but the main voice has to be the voice of reason. Cole is fine at that job and thankfully he might get a chance to do that from here on in.

JBL is scheduled to climb Kilimanjaro soon for charity so we may see a rotating cast of guest announcers until The King’s return. However, I hope they all fit into the mold of JBL.

Sin Cara took part in what was a slightly sloppy but decent match for the Intercontinental title. And while sloppy is a word that will often follow Sin Cara around in the ring, it’s a word that unfortunately Sin Cara won’t be able to say.

Since joining the show the silent Mexican luchador has been hit and miss (often missing more than just his moves) as far as crowd support is concerned. He has the ability to shine in the ring with some athletic, gymnastic moves so why is he failing to connect with the crowd? I think he needs a voice. I don’t think Sin Cara needs to talk himself. I kinda like that he just points at things. But the way that WWE works now, you can’t build up heat without cutting a promo so I feel there are only two options to help his WWE career. Either get a manager who can do the talking for him or get a tag-team partner.

I think both are equally likely to work. A luchador tag-team with Mysterio has been hinted at recently and would be a hit in my eyes. A manager could also build up Sin Cara’s mystery and talk about his history in Mexico etc. Either way, we need to hear something from him and soon or he’ll just get lost jobbing forever.

Pretty much all my favourite things in wrestling this year have revolved around Bryan in some form or another. He has really taken the opportunity he had after Money In The Bank last year and completely transformed his career. The crowd go crazy for him every time he comes to the ring and his promos have been fantastic.

In this new twist, he has been forced into a partnership with Kane. That’s right folks, the guy they had no clue what to do with other than shove him into other people’s matches as a wildcard element. They’ve found love in a hopeless place. Anger management. And now, they’re tag team champs. I’ll be honest, nothing about this should work. It’s the dumbest idea in years. Yet, it’s absolute gold. Both members are playing it up to full effect and Kane has managed to get a good few giggles out of me. That’s right, Kane, you guys.

This is doomed to fail in a blaze of glory, but while it lasts Team Friendship is going to keep me tuning in.

I’ve discussed at length here in the past Zack Ryder’s rather dodgy relationship with the WWE creative team. They either don’t like him or have no clue what to do with him. Possibly both. So Zack’s time on TV has been more than spotty and limited. Hell, the dude never got his USA title rematch. So when I saw him win the battle royal on the pre-show YouTube thingy I got more than a little excited.

Antonio Cesaro is a nothing champion. I’m not trying to diminish Cesaro’s skill as a wrestler, he’s fine, but there is no heat with him. Nobody cares. He became champion from nowhere and has done very little with it. I was fully expecting him to drop the belt to Ryder. What I didn’t expect was these guys pulling off one of the best matches of the night. I didn’t realise either competitor had as many moves in their arsenal as they do because “damn, girl” they impressed the hell out of me.

It helps when you get given a larger amount of time in the ring to do your thing. I would hazard that last night’s match was longer than their last three or four combined. But on the basis of this last minute, thrown together match-up I hope these two get to start up a long feud because it was great to watch.