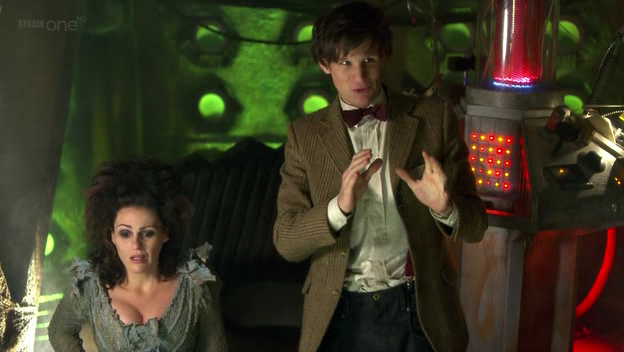 Review: Doctor Who – The Doctor’s Wife

Welcome back to DOOM’s weekly Doctor Who column, “No, YOU’RE a TARDIS!”. I was really looking forward to this week’s episode beforehand. I’ve loved everything I’ve ever read by Neil Gaiman so I couldn’t wait to see what he did with The Doctor. And the result is probably one of my favorite Doctor Who episodes ever. First off… Wow. I don’t even know where to begin! That episode was just so packed full of awesome moments. I think I’m going to take a bit of a different approach this week and just comment on things as they come to me.

The TARDIS has always sort of been a character in and of itself, but this week it was literally a walking, speaking person with a personality. It was great learning she sees the Doctor as ‘hers’ and the companions as ‘strays’ and learning that back on Gallifrey she chose The Doctor just as much as he chose that particular TARDIS. You see that she really has always been the one constant companion and that they were brought together by a mutual desire to see the universe.

It was really cool to finally see more of the TARDIS than just the control room. Granted, it all looked like that same corridor over and over again. But that really made the scenes where Amy and Rory were running through the corridors feel like they were in a veritable labyrinth and really weren’t getting anywhere. This coupled with the mind games being played on them by House made this sequence quite tense.

Building and then piloting the makeshift scrapyard TARDIS (geez, this episode was TARDIS heavy) was great. I kept wondering if maybe he would find a replacement chameleon circuit laying around somewhere. Though, I didn’t know a TARDIS could land inside of another TARDIS. The implications of that make my head hurt. Could say, TARDIS A land inside of TARDIS B and then TARDIS B land itself inside TARDIS A? Could there be a huge chain of TARDISes inside one another like matryoshka dolls? And finally, we got to see the old TARDIS control room again! There was a lot of speculation about it when it showed up for about two seconds in the series trailer. It was great to see why it made an appearance in the trailer and to find out that it had actually been there in the TARDIS all along.

In closing, TARDIS, TARDIS, TARDIS. It doesn’t even sound like a word anymore. It’s lost all meaning. But anyway, I quite loved this episode. Mr. Gaiman did not disappoint. Hopefully he returns for more episodes in the future. As always, be sure to leave your thoughts and theories in the comments. Thanks for reading!