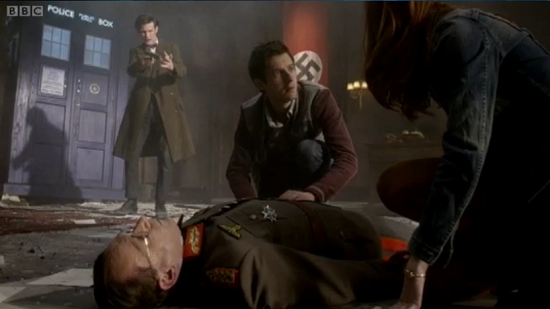 Hello, hello, hello! Are you all very well? Did you all have a nice summer holiday? Well, it’s about to get better because Doctor Who is back on our screens and with it, your beloved weekly column, “No, YOU’RE a TARDIS!”

So we’ve had around 3 months to ruminate on the mid-season finale and the new episode “Let’s Kill Hitler” kicks off with one big question; what has the Doctor done these past few months to find the errant Baby Pond?

He got a new coat. That’s something, right? In all honesty, after the high energy exit of the Doctor in the mid-season finale, you’d expect him to be chasing some fools down but no, he went and got himself a coat. During their little pow-wow, our trio are interrupted by Mels, a childhood friend of Amy and Rory and a rabid Doctor fan-girl. Making her entrance in a stolen sports car with the cops on her heels, she does what any deranged stalker fan does; she holds her obsession at gunpoint and demands to go kill Hitler.

Cut to Berlin 1939 and a high-ranking Nazi official is stalked by Alice from Revenge of The Fallen. Okay, not literally but it’s a cross between that psychotic Pretender Transformer and the Eddie Murphy robot in Meet Dave, complete with it’s on crew of miniature people hell-bent on bringing Hitler to justice. Because they can. Apparently. Anyway, It‘s just as the Robo-Nazi is about to kill Hitler when the TARDIS flies through the window (Mels shot the console!) causing a distraction.
I love this whole scene. The Doctor’s almost threatening glare after Hitler touches the TARDIS, Rory punching Hitler and delivering the one-liner to rival all one-liners, and Mels accidentally being shot. It’s here that we get the brilliant twist so put on a helmet because I’m about to blow your minds!

Mels is River Song. Or rather, she’s one of the regenerations of Melody Pond. After receiving a fatal gunshot to the stomach, she reveals in her signature quirky way (“Penny in the air, Penny drops”) that she is Melody and then regenerates into the more recognisable form of Alex Kingston. Mels was played brilliantly by Nina Toussaint-White, being a fully unique incarnation of Melody Pond/River Song while still keeping some of the basic charm of the character. It’s just a shame we saw so little of her.

Alex Kingston and Matt Smith steal the show as Melody revels in her new form, echoing many of the more memorable post-regen lines of previous Doctors. Once she settles into her new body, we get the assassin side as she tries in vein to kill the Doctor in numerous and comical ways. Like I said, Kingston and Smith make this scene so much fun and it’s a true delight. Anyway, Melody’s gimmick of kissing people comes into play again, but this time, she poisons the Doctor with a kiss. After River leaves and the Ponds chase after her, the episode kind of stops dead for me. From the relatively high energy first half, from this point you have a more reflective episode as the Doctor tries to find something to fight for (With some very nice use of stock character shots in the TARDIS) and the Ponds try to get through to their Daughter. To be honest, I didn’t like most of the latter half of the episode but it did have a lot of fun moments. After Melody/River makes some jokes at the Nazi’s expense, and hijacks a banquet hall before being approached by the Robo-Nazi, now configured as a Robo-Amy, intent on bring Melody to justice for killing the Doctor, only to have him show up to defend her because he’s technically still alive. And boy does The Doctor make an entrance, in Fred Astaire top hat and tails complete with Sonic Cane! I love this show, I truly do.

Finally dying and Melody’s mission complete, she asks who this “River Song” is they keep talking about. The Robo-Amy becomes a Robo-River and she takes it upon herself to save the Doctor, burning out all of her remaining regenerations and tying up River’s story neatly enough. I’m sure we’ll see her again.

This is definitely an episode of two halves for me. There is a very noticeable shift in the pace of the episode that felt very clunky but apart from that it was a highly enjoyable episode. Join me next time, when we delve into the unwholesome realm of “Night Terrors”.

Be sure to leave your thoughts and theories below! Thanks for reading.