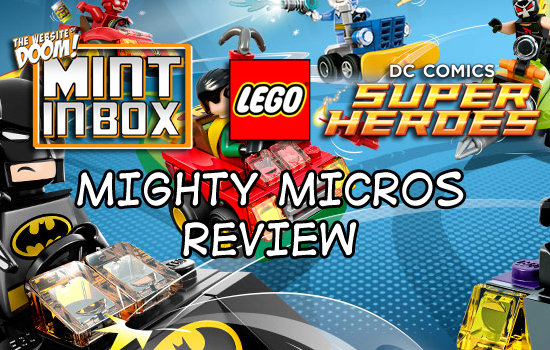 Just as Marvel had a set of three Mighty Micros, DC’s characters weren’t to be outdone and joined the fray! I will say that I’m immediately disappointed that Batman characters dominate the wave but Batman sells so that’s no a huge surprise. Speaking of… Batman vs. Catwoman makes a certain amount of sense on paper but I’m surprised they didn’t jump to Joker right away. I mean, should this line continue (and I truly hope it does), who would Joker be paired with? Batgirl? That’s kind of sadistic, given their history. Bats and Cats are pretty much as you’d expect, but with bigger printing on their torso and a nice carton of milk for Catwoman. One thing I really noticed in this set is that skin tone does not print well on black plastic; Bruce being much darker and Selina’s being very light. Given that this is Batman and Catwoman, it’s probably safe to assume these where the easiest to design. Batmobile and Cat-themed Batmobile? Done, let’s go to lunch. Let’s not be too hasty, I’ve got some ideas about Batman’s sidekick Robin that might just blow your mind! Robin vs. Bane or “How to break a Teenage Sidekick”. Wait… Awww, look at Robin. All chunk and rounded edges standing next to the murderous luchador wielding dynamite. Bane looks pretty adorable to be honest, with the murderous glare and ‘B’ on his chest like you need reminding of who he is. Robin’s cart follows the minifigure’s lead; having the same rounded, soft Robin symbol and playschool colours. At least the colours pop because the cart itself is as basic as they come. Bane, on the other hand, has an awesome downsized rendition of his famous drill-tank. I don’t know why LEGO Bane has a drill-tank but I’m not going to complain because he looks both cute and deadly! Finally, we come to the set that spawned this little review series, as I’d asked for it specifically since we have Flash Facts; our weekly look at the Scarlet Speedster’s adventures and was surprised with ALL the Mighty Micros! I think Flash and Captain Cold translate super well to this cutesy style and their accessories reflect that, Flash holding an energy drink while Captain Cold has an ice cream in addition to his cold gun. The guy still doesn’t look happy about it though. The Flash, much like Sonic The Hedgehog, does not need a vehicle but I have to say that I kind of dig his basic kart much more than Catwoman’s or Robin’s for some reason. Maybe because it looks the most like and actual go-kart. Like Barry put in so much less effort by just getting a regular go-kart and slapping his emblem on it. Captain Cold, meanwhile, is riding a zamboni into battle. That’s… Perfect. They should have sent a poet. It’s so delightfully silly that I love it. While DC’s Mighty Micros don’t quite have as much imagination in their karts as Marvel’s, the ones that do try come out looking that little bit more entertaining. I’d definitely recommend picking up the Flash/Cold set but your mileage may vary with the other sets.