In which we chat with wondroushippo (also found here and on twitter.) of the Calamitous Intent podcast. Topics include: A super jumbled up (thanks soulbots) review of “Any Which Way […

Topics include: • A cool intro song! • Weep promotion • An in depth discussion of “Pomp and Circuitry” • Discussion of the preview for “Every Which Way But [… 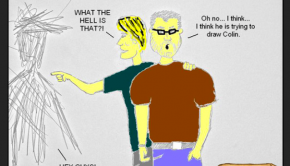 Welcome to Hands Down, DOOM’s own look into the world of the folks that frequent this sordid world of geekery. This week; the gang break some walls and some […

Just what the world needed: Another Venture Podcast! Brought to you lovingly by Katie (soulbots) and Steffanie (puremassacre). Made for the intentions of discussing our beloved show The Venture […

Riding in Cars with Boys #24: The Following Takes Place Between The Hours of 9 PM and 3 AM

In this, our 24th episode, we take a late night ride to the movie theater to watch the midnight premiere of Resident Evil: Afterlife in 3D. On the way [… 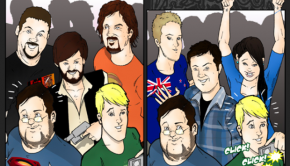 Welcome to Hands Down, DOOM’s own look into the world of the folks that frequent this sordid world of geekery. This week; it’s Dragon*Con and that’s always a good/bad […